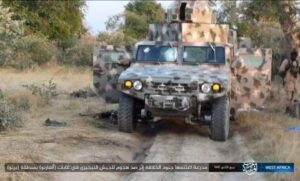 One of the vehicles in Nigerian Army camouflage pattern was a new Toyota Landcruiser (Buffalo) Guntruck and the other the newly inducted Kia KIA KLTV-181 military tactical-utility vehicle designed and manufactured by Kia Motors Corporation. 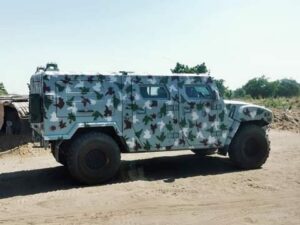 Calibre Obscura, an arms researcher, in a tweet on the incident said, “ISWA ambushed/repelled the NA in #Alagarno leading to multiple (7 claimed) killed and vehicles captured, including an up-gunned Kia KIA KLTV181 APC delivered only this year, and technical[ly] so new it has the emissions still on the window. HMGs/small arms likely captured too.”

The first official confirmation of the vehicles’ induction into the Nigerian Army was by Chief of Army Staff Tukur Baratai during the opening of his combined first, second and third quarters conference in Maiduguri, the capital of Borno State.

“These include the VT4 and FT1 tanks, the KIA light tactical vehicles as well as the SH2 and SH5 self,” he said.

In January 2019, the Army chief visited KIA Motors Corporation, where they were received and was briefed by Director Special Vehicle Global Sales Group, Il-Tae Kim.

The loss of equipment through capture and destruction by insurgents is widely believed to be a major contributor to the prolonged war in the Northeast. Similarly, the use of insufficient or inefficient protected mobility exposures troops to ambush, Improvised Explosive Devices (IEDs), and leads to loss of equipment.

The recent incident and drawback in Alagarno is part of a series of setbacks faced by the military in the area.

In March, dozens of Nigerian soldiers were killed and injured in an ambush in Timbuktu triangle-Alagarno forest. The incident led to a chain of events including the replacement of the then Theatre Commander Olusegun Adeniyi and his recent court marshall, following the leaking of a video where he highlighted the challenges faced by his troops.

The area has remained under the control of the ISWAP fighters despite sustained military offensives to retake it, to clear suspected ISWAP positions.

Attempts by soldiers to advance met with stiff resistance and challenges from ambushes and IEDs.

In September, the commander of 25 Task Force Brigade based in the Army Super Camp 2 in Damboa was ambushed alongside his troops. He died after undergoing a medical procedure.

The 25 Task Force Brigade is part of Army Super Camp 2 in Damboa Local Government Area, Southwest of Maiduguri. Some of the command’s battle areas are the dreaded Alagarno and Sambisa forests.

In October, days after the launch of Operation Fireball, dozens of casualties were recorded and a Major was killed in Doksa, Damboa Local Government Area of Borno.

Several military pieces of equipment were lost to the insurgents.