Anita Okoye, wife of Paul Okoye of the now defunct music group, P-square, has demanded a monthly payment of $15,000 (about N7.8m) as support. 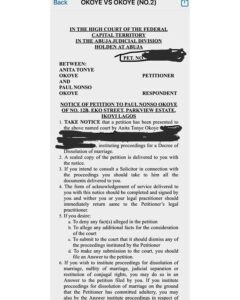 The estranged wife of the popular singer made this known in her petition for divorce, which was signed before the Abuja High Court.

“Payment of a monthly maintenance sum of $15,000.00 (US Dollars) for the general welfare, education and health of the three children of the union who are presently in schools in the United States of America until they are of age,” part of the document read.

The internet went on frenzy when the divorce plans between Anita and her celebrity husband, popularly known as Rudeboy, was made public on Friday.

However, the one-page document which seems to be a fragment of a larger paper work does not have the court’s endorsement on it. Also, the petition number and other aspects of it were blurred.

It could not be ascertained the date the said document was made or filed as there was no such information on the surface of the document.

Meanwhile, when a call was put across to Rudeboy, he stated that he was not interested in talking about the matter and hung up. He said, “You people should stop calling me about this s**t.”