A 19-year-old boy, Tajudden Igikalo, has been arrested by operatives of Edo state police command for kidnapping a 16-year-old secondary school girl he lured via Facebook. 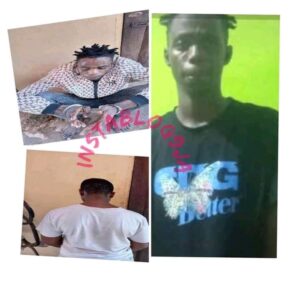 According to a statement by the command’s PRO, Kontongs Bello, the suspect met the 16-year-old girl on Facebook in February, 2021. They chatted for one month, following which the suspect invited the young girl to his house at Egba on Benin-Auchi Road in Edo state.

On Thursday, 25 March 2021, the girl visited Tajudeen after school hours. She, however, met the greatest shock of her life as the suspect allegedly kidnapped her on the spot and spent seven days in captivity.

It is reported that Tajudeen removed the sim card from her mobile phone to prevent the family members from reaching her. He proceeded to contact the victim’s family, demanding N3 million ransom for her release.

He threatened to sell the girl to herders if they failed to pay the ransom. “On 29th of March, 2021, the victim’s mother paid the sum of #550k into a bank account number made available by the kidnapper.

“On 30/03/2021, operatives of Anti-kidnapping and Cyber Crime Unit of the command through Hi-tech intelligence and a painstaking investigation, arrested the suspect and rescued the victim in his residence,” Bello said.

The victim in a statement said, “I met him on Facebook last month. He asked me to visit him, and I never knew he had the plan to kidnap me. I have never had s*x before. He raped me twice a day for seven days. I am still in pain now”.

However, Tajudeen, in his confessional statement said he took to the act to sort out some personal issues. Items recovered from him include two laptops, one new generating set, one industrial standing fan allegedly bought from the proceeds of the ransom paid, and N220K cash.