Arrested: Driver who usually tricks passengers, carries them to kidnappers

A driver, who is in the habit of tricking passengers to kidnappers den, has been arrested. 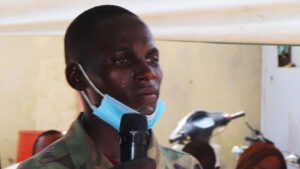 The 25-year-old is part of an 11-man kidnap gang who use motor parks to perpetrate their nefarious activities.

The gang members revealed their strategies when they were paraded by the police in Abuja.

The operatives also apprehended members of another gang terrorising residents of Gwagwalada, Kachia and its environs.

Speaking on behalf of the gang, a member, Bashiru Sule, explained that, “I am a member of the kidnap gang. My master taught me how to do kidnap well. We operate in Kano and take our victims into the bush where our boss is waiting.

“I board the vehicle as a passenger and sometimes, I drive my vehicle. I load passengers in the park and I provide information to my kidnap gang on the quality of people in the car,” he said

The 25-year-old suspect added, “In our last job, we kidnapped three victims and took them to the bush. Our gangs are stationed along the highways in Kano, Jigawa, Katsina and Kaduna. During our first operation, they gave me N70, 000 as my share. I got N40, 000 in my second operation and N30, 000 in my last deal.”

A member of the gang terrorising the Federal Capital Territory, Abuja, Musa Ibrahim, 27, said his gang, which operated with two AK47 rifles, had carried out kidnapping twice in Gwagwalada and also in Kachia.

Hafsat Adamu, who kept the guns, said the weapons were usually concealed in a box, which she delivered to one Babangida, her boyfriend.