Former Senate President, David Mark, is leading the race for the office of the national chairman of the Peoples Democratic Party, PDP, ahead of the party’s October 30/31 elective convention. 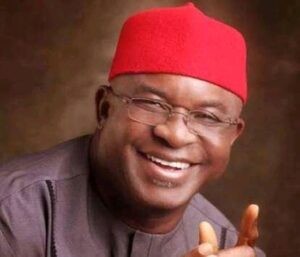 This comes as immediate past Senate President, Dr Bukola Saraki, has elected to seek the party’s presidential ticket in the 2023 election, instead of the national chairmanship which the leadership of the party zoned to the North-Central last week.

The two ex-heads of the Nigerian Senate had been touted with interest in the chairmanship race but Saraki, It was gathered that he has his eyes fixed on the presidential convention billed to hold in the last quarter of 2022.

Saraki, it would be recalled, came third on the log with 317 votes at the Port-Harcourt convention of the PDP in 2018 behind Atiku Abubakar and Aminu Tambuwal who garnered a total of 1, 532 and 693 votes respectively.

Mark, on the other hand, finished a distant 10th with 35 votes bettering only Jonah Jang and Baba Datti-Ahmed who scored 19 and 5 votes to finish 11th and 12th respectively.

A loyalist of Saraki who spoke in confidence said, “the former Senate President did not consider the option of party chairmanship for a second. He was approached, no doubt but his political choice is clearly spelled out and it does not involve seeking the chairmanship position of his party.”

Asked if the former Kwara State governor would again contest the Presidency, he said, “It is a road he has travelled before. He will do it again if a level playfield is provided for interested persons to play the game.”

Saraki, in the past few months, has taken ample opportunity of his nationwide tours as chairman of the PDP Reconciliation and Strategy Committee to build bridges not only for the party but also for himself ahead of 2023.

A former governor of one of the North-Central states and fellow National Executive Committee, NEC member told our correspondent that all Saraki needs to test the waters again was “if the Presidential race is open to all irrespective of geopolitical origins.”

According to him, “Saraki did well in the last Presidential convention. He is even better prepared now than a few years ago. So, if a conducive atmosphere is created to allow interested persons to participate, I can guarantee with a certain level of certainty that he will be there.

“Do not forget that most of the aggrieved people he is wooing to the party are also telling him not to give up. You can’t betray this level of confidence people have in you if you want to go far in politics,” he said.

Meanwhile, serving and former governors of the PDP are pushing a consensus arrangement that would see Mark emerged unopposed. It was gathered that this is to avoid the hostile environment created in 2017 when close to a dozen aspirants vied for the chairmanship at the Eagles Square, Abuja.

The hostilities eventually led to the exit of prominent PDP members including Professors Jerry Gana, Tunde Adeniran, Taofik Adedoja, and Rasheed Ladoja from the party.