Napoli has started winking at another Nigerian soccer star, Samuel Chukwueze, after signing Victor Osimhen for a record transfer fee of €70million few days ago. 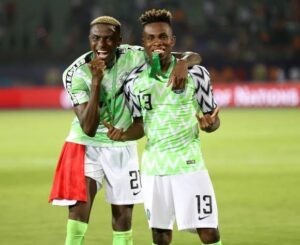 Chukwueze will be teaming up with compatriot, Osimhen, if reports by Italian publication, Calciomercato is anything to go by.

The publication, which focuses on Italian clubs, disclosed that Naples are making quiet research on the Villarreal’s wonder boy.

It was also gathered the starlet has all attributes to excel under the tutelage of coach Gannaro Gattuso, who rates him high based on his ability to move towards the centre and go shooting with his neutral foot.

Meanwhile, it was revealed that Chukwueze’s Villarreal exit looks rigid after the Yellow Submarine asked for, at least, €30 million to let him leave.

Chukwueze, who was nicknamed “Nigerian Robben” because of his dribbling skill and acceleration, is a very close friend of Osimhen. The duo are considered among the best prospects on the international scene.

Both players were spotted celebrating Osimhen’s mega move in Paris last week. The lads cemented their friendship after winning the 2015 U-17 FIFA World Cup in Chile.