The Governing Council Chairman of the Abia State Polytechnic, John Nwangborogwu, has tendered his resignation from the position. 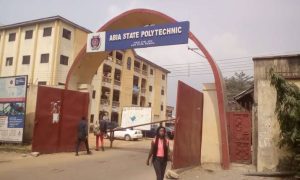 Nwangborogwu on Thursday in his resignation letter addressed to the Abia State governor, Okezie Ikpeazu.

He attributed his decision to constraining circumstances affecting his assignment.

The resignation letter read: “Your Excellency, the Executive Governor of Abia State, leveraging on the provisions of Section 22 of Edict No. 8 of 1994 and through a letter referenced POL/SSG/A.31/XXIX/II/310, dated November 26th, 2019, and issued by the Secretary to the Government of Abia State, had appointed me Chairman of Abia State Polytechnic Governing Council, which, by law, was a three year tenure.

“On the 20th of July 2022, Your Excellency announced a dissolution of the governing council which, as at then, had about 5 months to complete the tenure.

“On the 4th of November 2022, the governor recalled the governing council together with the equally suspended management of the institution. Today marks two months, two weeks and two days of the recall, leaving approximately two months and two months to the end of the statutory three year tenure.

“Sir, with humility and due sense of responsibility, I hereby tender my resignation of that appointment. I do this voluntarily as an appropriate response to certain constraining circumstances prevalent around and affecting my assignment for sometime now.

“I must express my profound gratitude to the governor for finding me worthy to serve Abia State in that capacity, and particularly so for recalling the dissolved governing council as above referred. Thank you and God bless you sir.”

In July 2022, the National Board for Technical Education (NBTE) revoked the accreditation of the institution over its failure to pay staff salaries and allowances for over 30 months.

READ ALSO: Reps Kicks Against Jan 18 School Resumption, Proposes New Date
The state government called the action “embarrassing” and announced the suspension and dissolution of the governing council and management of the institution, respectively.

Eventually in November, after the Polytechnic’s accreditation was restored, Gov Ikpeazu directed the immediate recall of the suspended members of the governing council and management the polytechnic.

He tasked them with ensuring strict and prudent financial management of the institution’s finances.

Meanwhile, according to the press release by the Secretary to Abia State government, Barr. Chris Ezem, Governor Okezie Victor Ikpeazu has approved the replacement of Chief John Nwangborogwu with Obioma Ekpem as Chairman, Governing Council of Abia State Polytechnic.