The Chairman of Assocuation of Local Governments of Nigeria (ALGON), Abia State Chapter, Michael Ibe Nwoke, has been removed by his colleagues. 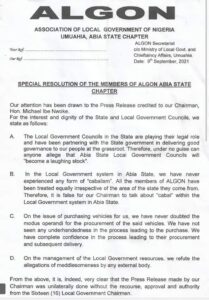 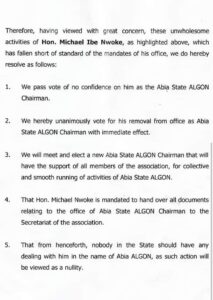 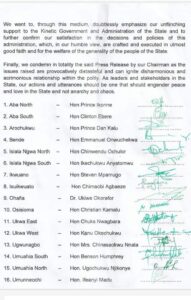 The removal notice which was contained in a press statement signed by the other 16 LG Chairmen of the State, cited “unwholesome activities” and issuing “provocatively distasteful” statements on behalf of the LG Chairmen “without the recourse, approval and authority from the 16 Local Government Chairmen”. They further emphasised that such statements could ‘ignite disharmonious and acrmonious relationship within the polity”.

The statement in full reads:

b. In the Local Government system in Abia State, we have never experienced any form of ‘cabalism’. All the Members of ALGON have been treated equally irrespective of the areas of the State they come from. Therefore, it is false for our chairman to talk about ‘cabal’ within the LG system in Abia State.

d. On the management of the Local Government resources, we refute the allegations of meddlesomenes by any external body.

From the above, it is, indeed, very clear that the press release earlier made by our chairman was unilaterally made without the recourse, approval and authority from the sixteen (16) Local Government Chairmen.

Therefore, having viewed with great concern these unwholesome activities of Hon Michael Ibe Nwoke, as highlighted above, which have fallen short of standard of the mandates of his office, we do hereby resolve as folows:

1. We pass a vote of no confidence on him as the ALGON Chairman

2. We hereby unanimously vote for his removal from office as Abia State ALGON Chairman with immediate effect

3. We will meet and elect a new Abia State ALGON chairman that will have the support of all members of the association for collective and smooth running of activities of Abia State ALGON

4. That Hon Michael Ibe Nwoke is mandated to hand over all documents relating to the office of the Abia State ALGON Chairman to the Secretariat of the Association

5. That, henceforth, nobody in the state should have any dealing with him in the name of Abia ALGON, as such actions will be viewed as a nullity.

We want to through this medium doubtlessly emphasise our unflinching support to the Kinetic Government and administration of the State and to further confirm our satisfaction in the decisions and policies of this administration which, in our humble view, are crafted and executed in utmost good faith and for the welfare of the generality of the people of the State.

Finally, we condemn in totality the said press release by our (now removed) chairman as the issues raised are provocatively distasteful and can ignite disharmonious and acrimonious relationship within the polity. As leaders and stakeholders in the state, our actions and utterances should be one that should engender peace and love in the State and not anarchy and chaos.