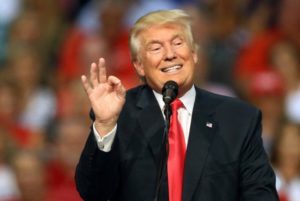 U.S. President, Donald Trump, has tested negative for coronavirus (COVID-19), according to his physician, Sean Conley.

“Last night after an in-depth discussion with the President regarding COVID-19 testing, he elected to proceed.

“This evening I received confirmation that the test is negative,” Conley said in a statement.

“One week after having dinner with the Brazilian delegation in Mar-a-Lago, the president remains symptom-free.

“I have been in daily contact with the CDC (Centers for Disease Control and Prevention) and White House Coronavirus Task Force.

“We are encouraging the implementation of all their best practices for exposure reduction and transmission mitigation,” he added.

The News Agency of Nigeria (NAN) reports that the announcement came hours after Trump said at a news conference that he had taken the test.

He had initially spurned advice to take the test after he was seen in a photo standing next to the Brazilian official, Fabio Wajngarten, who later tested positive for the virus.

According to reports, Wajngarten, a media aide to President Jair Bolsonaro of Brazil, was among officials who visited Trump at his private club in Florida last week.

No fewer than 2,443 people have been infected and 50 others dead in 49 states of the U.S., including the capital, Washington, D.C.

As of the time of filing this report on Saturday night, there were 154,000 confirmed cases and 5,800 deaths worldwide.