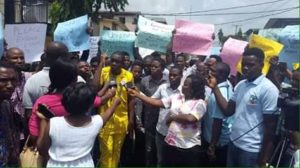 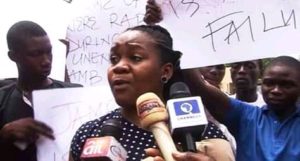 At the Ade-Ola International School CBT Centre, Kubwa, our reporter observed that parents protested at the school gates because of the failure of the virtual private network (VPN).
.
Some candidates scheduled to write the examination at 7am could not write until after 1pm because of network challenge.
.
The parents, who were agitated about the challenge, struggled at the gate to seek explanation from the school authorities. When our reporter visited the centre at about noon, some JAMB officials had arrived and were reportedly working on the systems.
.
One of the parents, who drove to the centre as early as 6am, told our reporter that the candidates were both famished and exhausted, having sat in the hall for hours without doing anything.
.
A parent, identified only as Mr. Okodili, said: “I drove with my son from the Lokogoma area and we got to the place 6.30am.
.
Nothing has started yet as of this 2pm. Parents are protesting and we have called in for JAMB officials to come and intervene.”
.
A candidate, Blessing (surname withheld), said some of the candidates were being hurried and could not use their two hours for the examination.
.
Parents kept on protesting at the gates as of 2pm when our correspondent left, as new candidates continued to arrive at the centre.
.
“We have been kept here for hours. The systems have not been working. We fear for these candidates because some of them are tired already, mentally disturbed and famished. The board should look into the inadequacies,” a parent, who gave his name as Alli, said.
.
At the Global Distance Learning CBT centre, Central Area, and the Maitama Model School centre, also monitored by our reporter, the UTME exercise went well and there were no network issues.
.
Also at the Sascon International School, Maitama Abuja CBT centre, the examination went on smoothly with no network issues.
.
The examination stared as scheduled by the Joint Admissions and Matriculation Board. Those who were given 7am schedule started lining up for biometric capturing before the time.
.
There was no incident when our reporter visited the centre. JAMB officials took their time to ensure that all candidates were accommodated for the examination