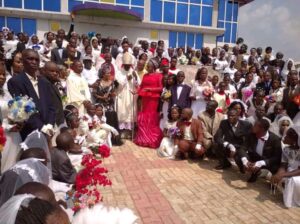 The biannual mass wedding, presided over by the Auxiliary Bishop of Umuahia, Diocese, Most Reverend Dr. Michael Ukpong was sponsored by the Women And Family Advancement Initiative, WAFAI. 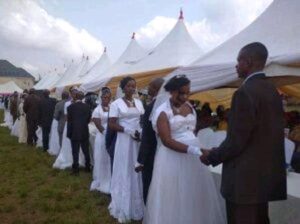 Saint Theresa’s Catholic Church field, venue of the event was filled to brim as couples excitedly exchanged marital vows to legalize their union before the Almighty God.

In his homily during the Pontifical High Mass, Most Reverend Ukpong described a proper marriage as one that shows unity in Christ and Church.

He reminded the couples that the union is a journey of no return and therefore, should abide by the promises made to each other and particularly charged the grooms to love their wives and brides to obey and respect their husbands.

Addressing the gathering during reception, the Anambra State Governor’s wife, Dr. Ebelechukwu Obiano represented by the Transition Committee Chairman of Ihiala Local Government Area, Mr. Jude Obiwuru defined the wedding as a great thing aimed at channeling the minds of the couples to raising Godly children, who will be good ambassador of the state.

The founder and president of WAFAI, Lady Uche Obi, explained that the Foundation is a non-governmental organization that has contributed immensely to the growth and development of a happy society, assisted vulnerable girl child and women on issues of rape and domestic violence adding that the mass wedding was aimed at enabling the couples uphold strong family values.

In their separate reactions, some of the couples including Mr. and Mrs. John Okafor and Kingsley Ibeabuchi thanked God for what he used Lady Uche to do in their lives and promised to keep their vows.

The Foundation used the opportunity to recognize some spirited individuals, including the member representing Nnewi North ,Nnewi South and Ekwusigo Federal Constituency, Mr. Chris Azubogu and Chief Johnbosco Onunkwo for their selfless service and support to the Foundation.

The mass wedding climaxed with the exchange of rings, cutting of cake and bridal dances