He thanked his fans for their love and support as he was surrounded by his wife and son. 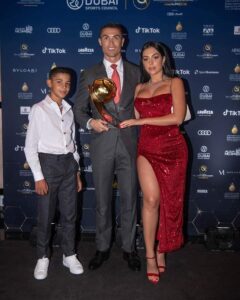 “Coudn’t be happier with tonight’s award! As I’m about to celebrate my 20th year as a professional footballer, Globe Soccer Player Of The Century is a recognition that I receive with so much joy and pride! Once again, great Gala tonight in Dubai at such an amazing place as Burj Khalifa.

Finally I must thank, once again, to the Dubai Royal Family for the respect, friendship and hospitality that I allways receive in wonderfull Dubai, and to all the fans that voted for me in such a huge worldwide online voting with over 21 million votes.