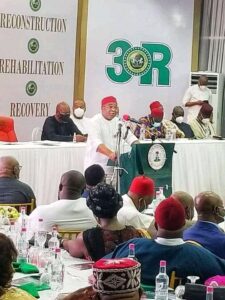 Uzodinma said this at a stakeholders’ forum, which held in the state on Tuesday.

Uzodimma had said he would use the occasion of the stakeholders’ forum to name those sponsoring insecurity in the state. 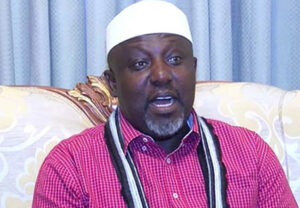 However, speaking on the occasion, Uzodimma acknowledged that that that statement from him heightened tension.

He said that rather than naming them, he would allow security agents who had identified them do so without interference.

He accused politicians and the media of “creating unnecessary tension and apprehension” in the state.

Uzodimma said, “You will recall that I have said that I will use the opportunity of this Stakeholders meeting to name those behind insecurity in the state.

“Since then, many politicians have latched on that statement to cause problems in the state. Even the media, both mainstream and social, did not help matters.

Uzodimma, however, accused Okorocha of usurping his ( Uzodimma’s) role by not realising that his time had gone.

“Rochas Okorocha is my younger brother. I am older than him and today I am the governor. He should recognize that fact and accord me that respect,” he added.