Governor Okezie Ikpeazu says Igbos have shown great faith in the unity of Nigeria more than any other ethnic group and called on other ethnicities to emulate the same spirit to foster a more united Nigeria. 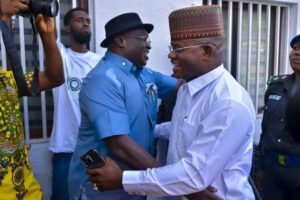 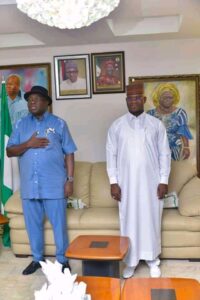 The Governor stated this when he received in audience at the Government House Umuahia, the Governor of Kogi State, Alhaji Yahaya Bello, who paid him a courtesy visit. He said the Igbo man lives and does business in every part of the country as well as contributes to the socioeconomic development of his host community.

In a release endorsed by his Chief Press Secretary, Sir Onyebuchi Ememanka, Governor Ikpeazu was of the view that despite differences, with a little more patience and tolerance Nigeria will overcome her current challenges. According to the Governor, if equal opportunities are given to Nigerian youths, they are capable of occupying strategic positions and leading the country aright and saluted Governor Bello’s disposition to galvanize Nigerians.

He associated himself with a united and stronger Nigeria which is the goal of all and cautioned that while we all should condemn the criminal actions of some people, we must avoid the temptation of wholesale profiling of any ethnic group in Nigeria. He appreciated Governor Bello for appointing youths in his cabinet including Igbo people and described him as his friend and strong pillar of support.

Earlier, the Kogi State Governor, Alhaji Yahaya Bello said he was in the State to identify with Chief Ikechi Emenike who is burying his mother in law in Umuahia and in line with official protocol, he came to pay homage to the Governor.
He commended Governor Ikpeazu for the good relationship existing between them.

Governor Bello used the opportunity to commend the Igbo people living in Kogi State for their peace and harmonious relationships in the State, adding that they have been contributing immensely to the economic development of Kogi State. He said no criminal arrested in Kogi State that has been traced to be an Igbo man and emphasised that he believes in the united Nigeria where agitations should be settled peacefully.