Abba Kyari on Tuesday denied collecting bribes from Ramon ‘Hushpuppi’ Abbas to detain a gang member Chibuzo Vincent, saying the notorious fraudster only sent him receipts of N8 million transaction to help him recover a loan.

Mr Kyari’s comment marked a stark breakaway from his initial defence following his indictment by the United States. The police chief had initially claimed in a Facebook statement on July 29 that he had no ties to Hushpuppi, saying the con artist only sent him N300,000 to help him purchase native wears.

But following Peoples Gazette’s report of how he collected N8 million from Hushpuppi, Mr Kyari edited his Facebook post on Tuesday night and changed his story as he came under widespread public ridicule and police administrative action. He said the N8 million reported by The Gazette, which was subsequently reported by other media outlets, was for him to collect as an outstanding debt owed to Hushpuppi, and not as a bribe for him to hold Chibuzo for the scamming of Qatari businessperson to pull through as alleged by the FBI in court filings.

“Nobody demanded or collected any money from Abbas Hushpuppi. He can be interviewed Publicly in the Presence of world media by the people holding him to confirm this. He also called for another case in June 2020 and complained about a financial transaction with a second person whom he said his friend sent 8million naira to and pleaded for his friends money to be recovered.

“He sent transaction slips and other evidences to prove their case against the person, All these can be verified from the Hushpuppi since he is still in Custody. And it can be verified from person who collected the 8million naira from Hushpuppi’s friend whom they complained about is alive and is in Nigeria. Generally Whatever investigation steps/Tactics that is being taken in most cases especially on the Parties in this type of case from January to June is not for public consumption. This is the true story,” Mr Kyari said. 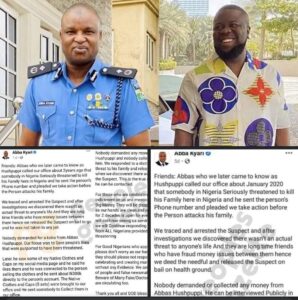 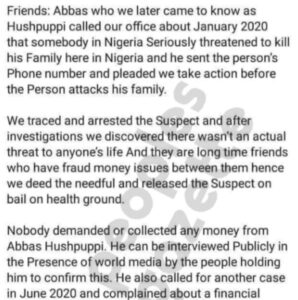 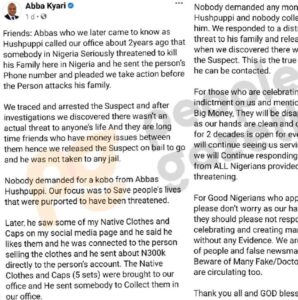