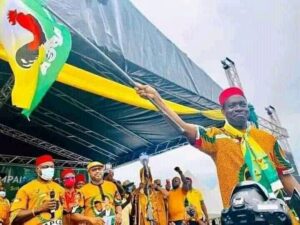 Before declaring the election inconclusive, Professor Obi had read out the total results from 20 out of 21 LGAs already declared, revealing that APGA polled a total of 103,946 votes to lead the pack while the People’s Democratic Party (PDP) garnered a total of 51,322 votes to place second.

The All Progressive Congress (APC) placed third with a total of 42,942 just as the Young Progressive Party (YPP) got 20,917 to place fourth in the ladder.

Meanwhile, the drummers who gathered at the Country Home of Professor Soludo were forced to put away their instruments for now as attention shifts to Ihiala Supplementary Results before further actions will be taken.

This is because of the inability of the commission to deploy staff and materials to Ihiala local government area, as a result of security threat.

Obi said: “we have collated results for 20 local government areas, and Ihiala is still outstanding as the commission was unable to deploy to the area.

“I plead with you to support INEC, so we can bring this election to a conclusion, to the glory of God. The election for Ihiala will hold on November 9.”