I took possession of my house on court order — Uzowulu

In this interview with RAPHAEL EDE, 71-year-old Chief Afam Uzowulu, a former Depot Manager with the Nigerian National Petroleum Corporation, reacts to allegation of rendering his wife and children homeless after allegedly setting their house on fire 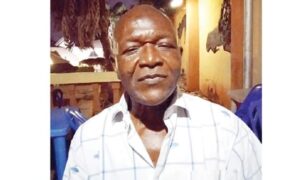 Do you know Mrs Chinyere Uzowulu?

Yes, I do know her. She is my ex-wife. She has three children for me. One set of twin boys and a girl.

You referred to her as your ex-wife but she still bears your name.

I divorced her officially in a court of law. The divorce was confirmed by the Court of Appeal.

But she said the divorce case is still in court.

She has challenged the divorce up to the Court of Appeal Court and she lost. There’s nothing more to challenge in the divorce. It is sealed.

But she said the case is still pending before the Supreme Court.

Yes, she went to the Supreme Court to challenge the jurisdictions of the Court of Appeal, the Customary Court of Appeal and the trial court at Nike to hear the case. To the best of my knowledge, it is neither here nor there.

You said you have three children together. Why did you file for divorce in the first place?

It is a long story. One, she is very aggressive; two, she is very insolent; three, she is very short-tempered; four, she has no regard for me at all; five, she is a chronic, unrepentant liar, among other things.

It was these vices, about nine of them, that made me to divorce her. She even went as far as inviting the police to intervene in our family affairs.

But she said the reason you filed for divorce was because she refused to give you 50 per cent of her earnings?

It is not true. Don’t constitute yourself into another court. We treated all this in the court and at the end, the court gave a judgment. She is talking about non-existent money. Ask her to bring her bank account; to see if she has the kind of money that she told you of. Did she tell you how much I asked her to bring 50 per cent of?

She said your sister took you to one prophetess called Ada Zion who told you that she has so much money.

Anything that the court has gone through, I will not address it here. You are not going to be a second trial court.

For how long were you married before you filed for divorce?

I think four or five years.

But being a multi-millionaire, was it necessary for you to eject her and your children from the house because of a divorce case?

She has to move out if that is the order of the court.

What becomes of your children then?

The question you should ask me is: what about the welfare of the children? The children are alive. They are very healthy. They are going to school; they have not dropped out of school.

But is it not premature to eject her now, since she has gone to the Supreme Court?

But can’t you let her stay, at least, for the sake of your children?

I am very sick and I am supposed to travel overseas for kidney transplant. I told her that this property is one of the properties I intend to either lease or sell to raise money because I need at least N18m for the treatment. I told her to please leave, so I could take possession of my house. But she refused, saying the matter is in court. But I pointed out that though she had applied for stay of execution, the court had not granted it and that until then, I was free to execute the judgment of the lower court.

I gave her one month to leave. When I came back, I met the house in a state of total disrepair and I needed to carry out necessary maintenance work before I put it on the market, either for lease, rent or sale because I need money to go for medical treatment. She refused. I gave her another two weeks and then I decided to go and commence the necessary repair works that I need to do.

However, I didn’t ask her to move out. I had decided that I would go ahead with the necessary repair works. I told her that she could still stay if she wanted to; or she could leave if she couldn’t stand the repairs.

What was her decision?

But she was not around when you went to execute the judgment.

We didn’t chase her out of the house. Up till now, nobody has chased her out.

She said you came to the house after she had travelled with the children for Christmas and that you set fire to her belongings and those of the children.

I burnt disused clothes, including my own.

Did the maintenance work involve the removing of the roof of the house?

Yes, the roof was leaking; it needs to be completely replaced.

You also pulled down the gates, the fences and the doors of the house.

Yes, I pulled down part of the wall. It is my property; if I feel like uprooting the house, I have a right to do that.

But, according to your wife, the Commissioner of Police ordered you to vacate the house.

You were accused of sending criminals to rob your wife and terrify your children so that their mother could pack out.

That is not true. Any time I ask people to go into that place, I make sure that the children are not there. If you want, I will bring the people I sent to clean up the place to tell you if they, at any time, met the children in the house.

And you don’t really care what happens to her and your children?

Is she the first woman with children to be divorced in Nigeria? Go and ask other divorced women with even more children what becomes of them. She is a medical doctor, for crying out loud. She earns a very good salary. She is from a rich family.

I am from a polygamous family. My father divorced my mother and my mother took us away. I didn’t know my father until I was entering the university. It was my mother that brought me up. It is God that takes care of children. My mother was hundred per cent a housewife. Her highest education was Primary Four but this one is a medical doctor. She earns well, so don’t bother about the children; they are comfortable.