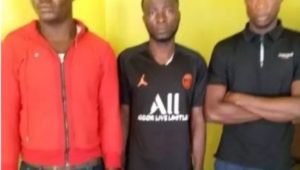 The three gang members, who are members of the church (name withheld) took turns in raping their pastor’s wife in the pastor’s home and on his matrimonial bed that fateful day, Monday, March 2, 2020.

One of the suspects, Richard, said that while going to the pastor’s house to help with house chores on weekends and weekdays, they would usually peep and lust after the woman and wish they could have their way with her.

Richard disclosed to the police that he saw an opportunity to satisfy their lust when Pastor Olajire Bayo called him that Monday and asked him to get some dirty clothes from his house to the dry cleaner.

“I called on two of my friends who usually go there with me to go together. Meanwhile, we’ve made our plans to sleep with her (pastor’s wife) whenever we find her at home alone.

“On getting there, she had just taken her bath and still in towel. We couldn’t resist it anymore. We followed her to the room and closed her mouth, shut the doors and threatened to beat her if she said a word while we took turns in sleeping with her,” Richard confessed.

She said they never believed she would be able to open up to anybody or her husband since they threatened her, but he knew their threat didn’t work when he saw policemen in his house.

Richard and his friends have been arraigned and kept in police cell at the Oyo State Police headquarters while the victim has been taken to the Akinyele Community General Hospital for medical check-up and possible treatment.

The Police Public Relations Officer (PPRO), Mr. Bello Olayemi, said that the boys would be charged to court for rape and assault.

He said: “This should serve as a lesson and warning to the public. It is not everybody you should give access to your homes. Learn boundaries and do your house with your household members.

“Do not trust just anyone; think of the safety of your kids, your husbands and your wives as you allow the opposite sex free access to your home.

“The home is sacred; it is not an office, a church or a mosque or business centre where in the name of pastor you want to exploit idle youths by sending them on endless errands.

“Do not trust even your church or mosque members. You never can tell what’s on their mind.

“The world is in turmoil; even the pastors’ wives are being lusted after and raped by church members and not even outsiders.

“This could have been their domestic staff or daughter, if they had any, and the child may be too scared to talk and such may go on and on.”