The giant, umbrella tree at Abia Hotel, Aba, will remain a haunting memory for a long time. Each time I find myself there, I will remember the glamorous Lady Sunshine, Ada Abiriba. I am sure it will be the same for all members of the Abia State Orientation Agency. For there, under the natural ambiance of the tree, was where we had our last super with the Orientation Lady. The tree provided our last shade and shelter and gave us our last covenant. 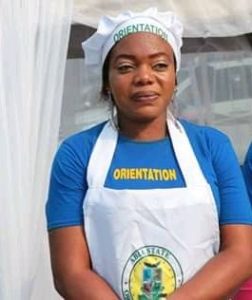 I naturally love open-air sit-outs. So when we finished from the Osisioma Community to Community Awareness /Enlightenment Campaign, on May 19, we retired to Abia Hotels, under the umbrella tree. We encircled two tables. Sunshine was sandwiched by Adims Abraham and Kingsley Maduforo. It was our custom to review every outing before we despise. I remember we ordered for malt drinks. Sunshine would later call for some doughnuts, about two or three, which she couldn’t finish. 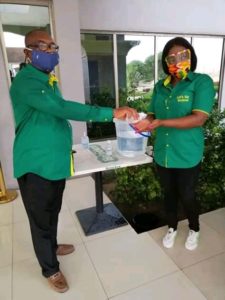 “Oga DG, you have to come to my church this Sunday to create awareness. We have to replicate what we did at SDA in my own church,” she threw at me, and shrugged her neck to create emphasis.
“No, problem,” I retorted. “But, our only challenge is that we are running out of Sanitizers. Well, I will see the SSG in the week for more Sanitizers and face mask,” I promised. I could see her face glow in a giggle that threw her long hairs backwards to her back. 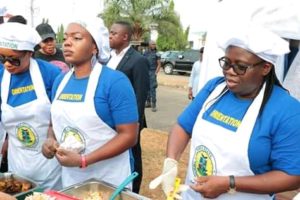 It was not long and a member of the team, Uche Olehi, joined us with his new car and a driver. We all burst into excitement and marched to the car for prayers. The driver lifted the burnet of the car and I offered the prayers for safety and more blessings. I recall saying something in my prayers about God taking the eyes of sidechicks away from the car. Sunshine interjected in a loud voice :”Oga louder, louder, louder!” Uche fought back from his corner: “No ooo. No oooo!”. And with this, the little ceremony ended in laughter and amusement. That was the Orientation team for you. We spice up work with humor. 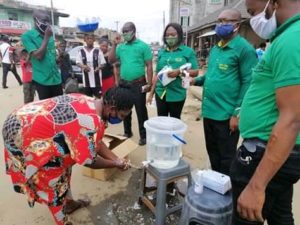 So when we gathered last week, on the same spot, I ordered a guy out of the seat in a corner where Sunshine sat the last time.
” please, could you get up from that seat. That is Sunshine’s seat,” I requested, rather politely. “Sunshine is here with us,” I affirmed with a clear note of seriousness. The team burst into a mourning mood. I saw Enyinnaya Mathew bent his face on the table. Others started rubbing their faces with hankies. Chinonyerem held his hands across his chest, lost in frightful memory of our Orientation Lady. Uche Olehi was shaking and shivering. It was a very emotional moment. Everyone of us was badly hit by Sunshine’s sudden demise. I tried to conceal my tears as I watched the team members groan and grieve openly. Then, I called for two minutes of silence in honor of Sunshine. We all stood up and observed this solemn respect for our Lady – the Orientation Lady.

Later, we began to recall fond memories of Sunshine. At our campaign in SDA Church Umuagu, I auditioned her for the lectures on Covid-19 protocol. As a member of the NCDC Risk Communication Management team, I have been privileged to the prescribed modules for communicating issues around the pandemic. So after rehearsing with Sunshine, I put her on the stage. At the church, she mounted the rostrum and gave a 20 minute talk. Sunshine was very brilliant and knowledgeable. She delivered her lecture with confidence, occasionally interspersing with Igbo and English. The church was happy with our visit and grateful for our donation of hand Sanitizers and face mask.

From the church, we headed to Opopo Junction in the Orgbor hill area of Aba to launch our Public Outreach Campaign Model. It was a huge success. Sunshine would talk to the people one-on-one before handing out our gifts. She was all over the scene and became the face of our Orientation programs.

We were looking up for our next outing after Osisioma. We had decided on visiting Ugwunagbo so I put a call across to the TC Chairman, Sir Peter Aguomba and informed him about our planned campaign in his territory. I went on to scout for materials and the team was waiting for my signal when Sunshine escalated her ill-health on our platform. In the last two months, she had been battling with Typhoid fever and pneumonia. She kept me posted on the progress of her treatment. In our last three outings, she was really weak and managed to pull herself out. It was obvious she has lost some good weight and looked very emaciated. Yet, she tried to radiate her usual energy.

When the team visited her brother, Engr. Onuoha Nma, on a condolence visit, he informed us that Sunshine was affected by cold when he visited Germany last year on Rotary Global retreat and it resulted in acute pneumonia upon her return to Nigeria. So since last year, she has been battling with intermittent bouts of pneumonia. She couldn’t make it this time around.

Sunshine was a fashionista as she called herself. She was given to style and glamor and brings this creative mind into everything she did. Because I dedicated my May 16, birthday to the Orientation team, she secretly mobilized the members for a surprise package for me. So after the Opopo Junction outreach, we retired to the open field of Las Pamas. Low and behold, from nowhere, a huge customized birthday cake, bearing my name and colors surfaced. And then, the happy birthday song broke out. With Sunshine and Mathew leading the toast, members raised their cups and toasted to my good health and other divine favors. But, unknown to us and quite ironically, we were celebrating a send forth for Sunshine. For this, am sure, became the very last social event for a woman who was herself an Event Mistress. She ran an event company in Aba.

Our stay with Sunshine was rather brief and short. But, in the brief moment that we shared together, she left indelible mark. She became the face of the Orientation Agency and approached it with so much passion. I didn’t know her for too long. We had a chance meeting last year at the Eastern Ngwa Country Club, shortly before my appointment as the Director-General of the Abia State Orientation Agency. She had come with her uncle, one Otah Ukariwo, a tall huge and imposing fellow who works with the ASEPA Aba. She mistook me for a Rotarian whom she used to know and enquired about me from her Uncle. Otah told her I was the former Chief Press Secretary to the Governor and mentioned my name to her. She jumped at my name, saying that she used to read and learn from my writings.

“Ah, Adindu, you are a fantastic writer,” she hollered.
“Which of my writings did you read?” I asked. She could remember three off-handedly. “I read The Aba Urban Drive. I read Ikpeazu, the Street Sweeper of Aba. I read letter to the Abia Tribunal and many. Then, I listened to your tribute to the mother of the Governor on Magicfm Aba the morning she was buried. I still have those papers in my house. I put them in a file. The presenters spent about five minutes, talking about the tribute after it was read. ”
Sunshine struck an immediate chord. I ordered for pepper soup for her. Before we dismissed that day, we exchanged numbers. This was around May 2019.

I never saw Sunshine again untill one morning in November 2019, when we were about to embark on Environmental Road Walk in conjunction with ASEPA Aba. I checked through my phone for friends in Aba that I could invite for the public outreach. Then, I remembered the lady I met at the country club. Sunshine came and took up the mantle. She walked through the streets of Aba with us and showed so much interest in what we did. Later that day, she posted a fantastic story about the event. I posted her story to our platform for others to read. From then, Sunshine never looked back on the Agency. She fell in love with it and became passionate about its concepts and programs. She would later inform me that she was the President of a chapter of Rotary in Aba, an ABSU graduate of Environmental Resource Management. And was also deep into charity work.

Sunshine was a kind heart and gentle soul. She brought passion, almost an obsession, in everything she believed in. She believed in the Orientation Agency and gave herself to it. She helped me to build it, voluntarily and without any single remuneration. Members of my team are all volunteers and Sunshine, as the only lady, was the chief of the volunteers. It was a sacrifice I had hoped to repay, but which I will never repay. Sunshine shared her last moments in life with us and left us with broken hearts.

Sunshine is a driver, a believer in delayed gratification. Because of her great communication skills, I once asked her whether she made a first class or an upper division. She disclosed that she made a second division. “Oga, you would teach me how to write like you,” she demanded. “You will never write like me, Sunshine. But, you will write like yourself. Nobody writes like another person. But I will teach you what makes for great writing,’ I replied. Will I ever teach her?

Sunshine had given herself a job on merit with the Abia State Orientation Agency. I have hoped to recommend her for employment or appointment. But, Sunshine was on sick bed the day we broke the news of the Executive Assent to the Orientation law. She died two days after. She will never take up this job. So many conflicts and ironies!

I bear a burden of loss, a pain of bereavement. I bear the pain of losing a brain. I suffer the hollowness of ingratitude, for she didn’t live to gain. Sunshine, You are a flower that blushed unseen. But, in your very little time, you gave so much to life, to humanity.

Goodbye Sunshine. Rest in Peace. We all shall die. So let it be.