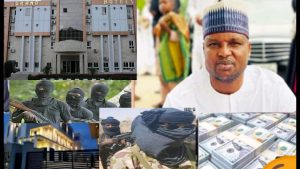 NDLEA showed footage of Kyari trying to bribe one of its operatives in a bid to carry out a drugs heist in the country.

Recall that the agency had declared him wanted over alleged links to a drugs cartel.

Babafemi, while addressing a press conference, also gave details of how Kyari approached its operatives to help in the cartel’s operation.

To further buttress the NDLEA’s claims against Kyari, the footage of him giving the operative wads of dollar bills was released.