Suspected terrorists are said to have blown up St Francis Catholic Church in Owo, the headquarters of Owo Local Government Area of Ondo State. 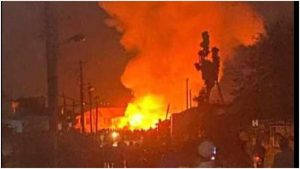 Emerging reports suggest that many worshippers have died and several others have been left injured following the explosion at the church which is situated close to the palace of the Olowo of Owo, Channels TV reports. As at the time of filing this report, the authorities were yet to give a detailed statement regarding the development. The police are expected to give a brief within the hour. Details later. Source: Legit.ng