where he made a case for better revenue allocation to the state from the federation account. 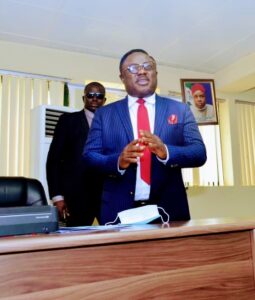 Ayade, who addressed the Commission’s committee on Fiscal Efficiency & Budget, lamented Cross River’s poor financial status, which he blamed on the ceding of Bakassi Peninsular to Cameroon and the consequent transfer of the state’s 96 oil wells to Akwa-Ibom state by the federal government.

According to the governor, the twin actions of the federal government plunged Cross River state into severe financial crisis and untold hardship, leaving her helpless with the second smallest federal allocation in the country.

He maintained that the federal government was unfair to the Cross River despite being responsible for her plight and appealed to RMAFC to consider upscaling federal allocation to the state.

He used the occasion to highlight some projects embarked upon  by his administration, including the ultra modern rice seeds & seedlings multiplication complex, Cocoa processing factory, chicken processing factory, rice mill and noodles factory amongst others.

Ayade solicited the intervention of the RMAFC through the commission’s special fund for the development of natural resources, to enable the state consolidated on the gains recorded, particularly in the area of agro-industrialization.

He said the numerous industries and critical infrastructure put in place by his administration were not only for the benefit of Cross River state but the entire nation as they are meant to create hundreds of thousands of jobs for the teeming youths, help further stimulate the economy and fight hunger and poverty.

He regretted the harsh predicament suffered by Cross River due to low federal allocation.

Yuguda who also commended the governor for the achievements recorded in the state so far said: “Your projects are mind boggling, particularly your heavy investments in Agriculture and its value-chain. The fact that Cross River state lies in the south-south region of the country and one of the states in the Niger-Delta, one begins to wonder how such investments outside oil and gas are tenable. For this singular foresight and achievements of your administration, the commission wishes to congratulate you.”

The chairman disclosed that the Commission’s Special Fund for the development of natural resources from where the state is seeking intervention “was established to help achieve resource diversification and provide alternative source of revenue to oil, not only to the federal government but also the sub nationals.”

He was of the view that Cross River State has shown enormous commitment in seeking alternatives to oil by embracing the federal government resource diversification policy.