Abia needs a leader that is contented, firm, fair and focused.Because Abia has rigmaroled far too long, with powerful individuals, its structures,at all levels, have regrettably weakened. 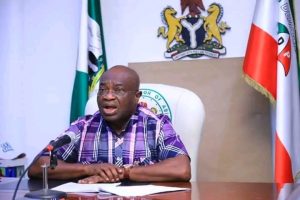 People are not obedient to the laws that govern the state but to laws of the individuals they benefit from. That is why the government will ask traders, at Isi gate in Umuahia, to vacate their illegal trade posts only for a powerful person to urge them on for instance. Or,the revenue Agberos in Aba,vehemently resisting the express orders of the government because they are backed by powerful individuals.

Inadvertently,the government, other than create a strong “system”, has surreptitiously,over time,allowed strong individuals who won’t let go the ruins of power no matter what.

No powerful man should control the Abia IGR.Ikpeazu has insisted. To ensure this, he has activated a result-oriented automated and fairly integrated revenue collection system in the state. Not without fierce battles with the cabals though, but he seems to be winning with the more determined Mac Atasie team.

Through the digitised payment system things are coming up fine, even though very far from the expectations of Abia masses. But a system is engendered ,that is the good news .It will only require another focused and resolutely dogged administrator to sustain it. Ensuring that arrogated authority is taking away from powerful people, that did as they liked with it,to a seamlessly auto-piloted system that shields the state from reversing to status quo.Abians now know their daily IGR flow or better still,can postulate possible result even from far away Europe.That is made possible by a “system” of some sort.

Governor Ikpeazu has launched an SME directory, a compendium of SMEs in the state as part of the one stop shop initiative that will create a system that works seamlessly for businesses in Abia. To boost this, Ikpeazu developed a 30 year- development plan for the state developed by -PIND Foundation in collaboration with Abia state government.An SME bank is already mainstreamed to aid SME starters.

Abia under Ikpeazu is not there yet but the structures that enable a sustainable system to thrive, and get Abia to greater heights, have been laid. It is now left for a courageous leader to continue.

Perhaps, that is why Ikpeazu is careful of who succeeds him since he understands the vagaries of the Abia politics as well as the precariousness of Abia economics .

He does not seem to favour stranger elements,whose imperceptible sense of patriotism seem beclouded by crescive rage and unquenchable urge for vengeance.
He is also careful of unstable characters with questionable morals. Simple, Ikpeazu wishes to get it better with a leader that is better.

That is where the gubernatorial candidate of the Peoples Democratic Party PDP of the state, Prof Eleazar Uche Ikonne, comes in. But the question is why did the governor pick Ikonne? Was it just a personal imposition? No, there was an electoral procedure too. But why the preference for Ikonne?

Ikonne is on records for saying that he will grow strong systems, not strong individuals. He is also a no-nonsense person. Ikonne’s antecedents at the Abiaploy is evident. His reformatory efforts at the Abia state University ABSU is equally exemplary.

He strengthened the academic, administrative, infrastructural frontiers being also responsible for the full implementation of the three zone campuses in Umuahia (Law Faculty) and Aba (Pharmacy and Engineering) as well as existing Uturu campus. This is about system creation. The Law Faculty is up and running while Aba Pharmacy /Engineering schools are nearing completion.

Recall that the ABSU three- zone campus plan was an Orji Kalu policy but none of the VCs could implement it fully until Ikonne came in, showing a strength of character typical of the leader that Abia state needs.

So Abia needs a man of strong character.

When there were IGR leakages at the ABSU owing to payment racketeering, Ikonne stopped it through an electronic payment system, about the same thing Ikpeazu is doing in government, using automated payment system for the Abia IGR.

Because of Ikonne’s personality it is difficult for him to be manipulated or unduly controlled.

One of the biggest problems in Abia is attempt to control leadership. He knows how to handle such being an institutionalized management expert. He has records of enthroning successful fiscal policies and human resource management mechanism that checks abuse of power.

He did it as VC, and throughout his tenure he ensured there was no strike or internal crises that could disrupt the school calender from 2015 till 2019.Not even the salary was owned but for the novel covid-19 pandemic.With a tested system stability module,Ikonne put ABSU on the path of speedy development.

Ikonne performed creditably well at his former postings. And as the university is micro of the state, he can repeat those giant strides as Abia Governor.

If Ikonne was not controlled in ABSU, it will be difficult to control him as governor.

It takes an effectual, sagacious leader; focused, dispassionate technocrat; a confident and contented person to lead Abia. Abia also needs a strong personality with high moral quotient to withstand the temptations that could either attract or distract the seat of governance.

Abia needs a charismatic leader for a formidable system that will stand the test and vicissitudes of time.

Abia is serious business, so there is no opportunity for merger or outright sale,like it’s done in financial institutions in an event of failure due to maladministration or any undisclosed malfeasance. Abians cannot afford to take such risk.Abeg, Politics is not razzmatazz!

The next issue is equity. One big trait to peace and unity in Abia state is this unsavoury,albeit emerging, tendency towards clannishness . Abia’s unity needs to be strengthened.

Thus, Abia needs somebody whose sense of equity and fairness is not in doubt. Not somebody whose only consideration for a worthy running mate is his brother, but one with strong sense of unity even amid our regional diversities.

Ikonne’s implementation of the three zonal -campus policy shows a man of equity and for equity.

Did Ikpeazu notice all these qualities in Ikonne to have been attracted to him? Perhaps, yes. It takes a man with a strong sense, for the future, to raise an Ikonne whose personality is perfectly fit for the future that Abians long for.