2023: “God Told Me Atiku Will Win But Peter Obi Is The Moses Of Nigeria” – Prophet Elijah Bamidele

As 2023 General Elections draw closer, some servants of God have claimed they received visions and revelations from the Lord concerning the country. 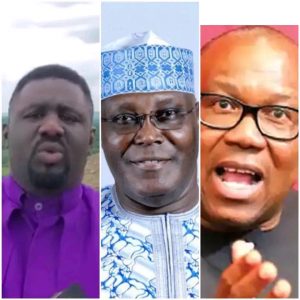 Why some visions and revelations will appear positive, others may appear negative to a set of people. This has also put concerns in the minds of many believers about the future of the country.

However, according to the vision Prophet Elijah Bamidele claimed to have received from the Lord, the Peoples Democratic Party (PDP) were rejoicing over their victory in 2023. He mentioned some top allies of PDP that ensured PDP reclaimed power from APC.

“Peter Obi is the Moses of Nigeria but some strongholds will stand against him”, Prophet Elijah said from the video.

Newsmirrorng learnt from his vision that Atiku Abubakar will defeat other 2023 presidential candidates but Mr. Peter Obi of the Labour Party will become President in time to come.

He also urged Nigerians to get their PVC ready.