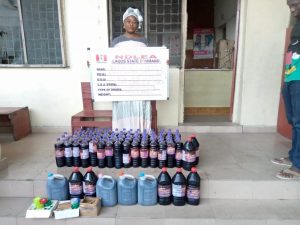 The NDLEA spokesperson, Mr Femi Babafemi, said this in a statement on Sunday in Abuja. 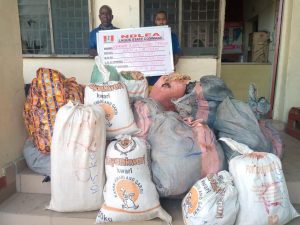 Babafemi said the first to enter the agency’s dragnet was a Brazilian returnee, Nworie Chikwendu, who was arrested on May 3. 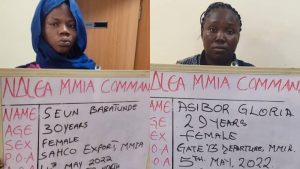 He said the suspect was arrested during an inward clearance of passengers on Qatar Airways flight from Sao Paulo, Brazil, enroute Doha to Lagos.

He said during a search of his luggage, two parcels of cocaine were discovered in a pair of slippers hidden in his backpack.

He added that a further search of the pair of black slippers worn by the suspect also led to the recovery of additional two parcels of cocaine.

These, he said, were built into the soles of his foot wears, bringing the total to four parcels weighing 800grams.

According to Babafemi, when undergoing preliminary interview, Chikwendu, who claimed to be a barber in Sao Paulo, said he came to Nigeria for the burial of his father.

“He confessed he decided to get into the criminal act because his trip was sponsored by his Brazil-based friend who gave him the drug to deliver in Lagos for a fee of N2, 000, 000.

“The following day, May 4, NDLEA operatives at the Skyway Aviation Handling Company (SAHCO) export shed of the airport intercepted some cartons of alcoholic drinks suspected to contain illicit drugs.

“A freight agent who brought the consignment for export to Dubai, UAE, Shola Ogunrinde, was immediately arrested.

“While a follow up operation led to the arrest of a pregnant woman, Mrs. Seun Babatunde, who operates an alcohol joint in Pleasure area of Iyana Ipaja,” he said.

He added that when the cartons were opened in the presence of the agent and the pregnant owner, seven parcels of cannabis and a sachet of ecstasy drug (MDMA) were found concealed inside cans of black bullet alcoholic drinks.

“In her confession, Mrs. Babatunde claimed the drugs were being sent to her husband who lived in Dubai.

“The second pregnant woman, Mrs. Gloria Asibor, was arrested on May 5, while attempting to board a Turkish Airline flight to Bolonia, Spain via Istanbul, Turkey.

“A search of her luggage containing food items led to the discovery of 300 tablets of 200mg and 225mg high dosage Tramadol concealed in crayfish,” he said.