Nigerian drug trafficker, Theophilus Ugwu has been sentenced to death for illegally transporting 5.92 kg of a drug called Methamphetamine from Camboodia into Vietnam. 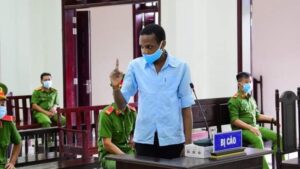 Ugwu, 23, who came to Vietnam to play football was sentenced to death on Tuesday, May 25 by the People’s Court of Tay Ninh province for transporting narcotics.