He [Primate Ayodele] empowers them [his members] wish cash and materials they can use to set up themselves gainfully. I was impressed with that. But the prophetic aspect?” 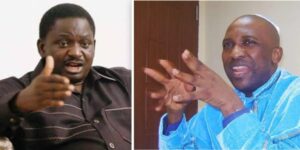 Mr Adesina’s criticism of Mr Ayodele comes after the cleric predicted that Nigeria will break between 2035 or 2040.

The renowned seer had on July 10 predicted the disintegration of the country irrespective of opposition from any region. He mentioned that none that none of the current separatist agitators-Nnamdi Kanu or Sunday Igboho- would lead the break up.

In an article published on his Facebook page, Mr Adesina said he knew the cleric for offering welfare and support to his members and not accurate prophecies.

“I know Primate Ayodele. I have been a special guest in his church when I was Managing Director/Editor-in-Chief of The Sun Newspapers.

“He does great things in terms of welfare for his flock. He empowers them wish cash and materials they can use to set up themselves gainfully. I was impressed with that. But the prophetic aspect?” Mr Adesina said.

Listing some of the prophecies of Mr Ayodele that failed to come true, Mr Adesina said the long list of Mr Ayodele’s failed prophecies shows he doesn’t hear from God or speak the truth.

“Let’s look at all these facts: in the build up to 2015 presidential elections, Primate Ayodele said Goodluck Jonathan would win. The man lost. He said the People’s Democratic Party (PDP) would take Kaduna by a narrow margin. Nasir el-Rufai of the All Progressives Congress (APC) won. Again, he said Yobe, Gombe, Benue, Delta, and Akwa Ibom States would be won by PDP. The APC won three of those States. Who hit the crossbar? You know the answer.

“And in 2017, when the President was on medical vacation abroad for many months, he said the seat was vacant, and the man would never return. You now know who didn’t speak the truth, who didn’t hear from God,” Mr Adesina said