At least 20 people from the Randa Community in Maru Local Government Area of Zamfara State were killed after terrorists loyal to notorious terror kingpin, Lawalli Damina, kidnapped the entire male residents of the community over missing rifles. 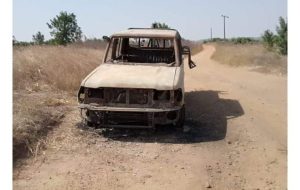 Locals and a traditional leader told our correspondent that the terror leader abducted the male members and children of Randa after they denied knowledge of the whereabouts of two rifles that allegedly went missing in the community.

The rifles were said to belong to two fighters of the terror kingpin who were killed by another gang member after they clashed over a girl in the community.

Randa, which is under Mutumji ward, is in the Dansadau Emirate and sits at the edge of Kuyanbana forest in the ungoverned boundaries with Katsina, Kaduna, Kebbi and Niger states.

We reported last year September how bandits attacked the Forward Operating Base in Mutumji, killing nine air force personnel, two policemen and one personnel of the Nigerian Army.

The bandits reportedly also stole weapons and other equipment before setting the base ablaze. Since then, the Nigerian government has not redeployed security personnel to the area.

Bandits have imposed a protection levy on residents of the almost 40 communities in the area following the withdrawal of security personnel from the area.

How the latest kidnap happened
A traditional leader in Mutumji, Abdulkadir Abdullahi, told us that Randa has since paid their protection levy and entered a peace truce with the bandit kingpin, Mr Damina, whose fighters have unrestricted control over the community.

Last week a fight broke out among the fighters as they fought over a lady who visited from the Shinkafi area.

Mr Abdullahi said one of the armed bandits identified only as Gora, met two of his colleagues with a lady identified as Zaliha. After a quarrel broke out, Mr Gora withdrew from the community in annoyance. He, however, ambushed his colleagues at the outskirts of the town, while they were returning to the forest. He killed them on the spot and fled.

The rifles of the deceased bandits went missing.

The traditional leader said following the incident, the bandits’ leader, Mr Damina, visited the community and compelled the community members to bury the deceased gunmen according to Islamic teachings.

After the burial rituals, Mr Damina summoned all adult male members to a meeting at a mango plantation on the outskirts of the town, where he demanded the two missing rifles.

“Unknown to the locals the location was surrounded by armed bandits, Mr Damina abducted them after they denied knowledge of the missing rifles, he insisted that the rifles were within the community.

“He abducted over 270 locals from Randa. He said he has forgiven them for the killings of his boys but insisted that the community must bring the missing rifles.

“As I spoke to you now, over 20 people died from suffocation, trauma, and other sicknesses because they were locked up in overstretched structures.

“Some of the abducted persons have died of heart attack after one of them was slaughtered in their presence, others were shot at close range after they denied knowledge of the missing rifles.

“Three of the abducted person have escaped. We have reported the incident to the government authorities but there has been no response from them over the week. Now he (Mr Damina) has placed N60 million for the missing rifles before releasing the abducted locals.

“Unfortunately, the same people who prevented us from farming are asking us to give them money, where is the money? Those that were able to farm, their crops have been destroyed, stolen by the gunmen,” Mr Abdullahi said.

He said the abducted locals are still being held captive while women who were left behind in the Randa community have fled to Dansadau town and other neighbouring places.

The Zamfara State Government is yet to speak on the incident.

The Zamfara State commissioner of Security and Home Affairs, Mamman Tsafe, told our reporter to give him an hour before commenting on the incident. However, hours later he did not respond, and his phone was switched off.

The police spokesperson in the state, Muhammed Shehu, did not respond to phone calls and text messages to comment on the incident.