The opposition has no ground in Aba any more because even they (our critics) have acknowledged that our governor has done marvelously well and as a result Aba electorates are with the PDP”, the Peoples Democratic Party (PDP) Abia State, Chairman, Rt Hon Asiforo Okere, declares 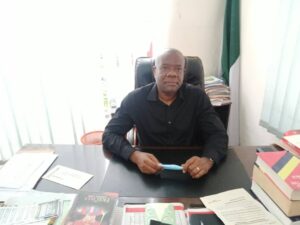 Indeed, as the campaign for the bye election for the Aba North/Aba South Federal Constituency enters into anticlimax, the PDP chairman, Rt Hon Okere has declared that the PDP will get overwhelming victory in the election because of the massive infrastructure, particularly road rehabilitation programme on going in the commercial city.

Okere, who spoke to journalists at the party’s secretariat in Umuahia on Monday explained that Aba residents have collectively and individually assured the PDP of their block votes in this Saturday’s bye election.

According to him, having seen that they made a mistake by supporting the All Progressives Grand Alliance (APGA) in 2019, the electorates in the city have pledged to return to the party that has given them the dividends of democracy rebuilding the entire the town to an international standard, adding that the All Progressives Congress (APC) will lose woefully in the election on Saturday .

The PDP led government, he remarked, reconstructed not less than 30 roads in Aba alone, pointing out that the Governor Okezie Ikpeazu-led government has opened up the town and linked to the international arena for development in its six year administration of the state.

On the statement made by the former governor of the state, Orji Uzor Kalu that the roads being built are part of the efforts of the federal government, the PDP chairman who was a former Speaker of the Abia State House of Assembly described Kalu as a joker.

“He knows that the roads are being built by the Governor Ikpeazu’s administration with World Bank assistance. Nobody should take Orji Kalu serious because his candidate, who happens to be his younger brother, will definitely fail in the bye election on Saturday”, he submitted.

On the possibility of the PDP candidate, Hon Chimaobi Ebisike, winning the poll, Okere said, “our candidate is the best candidate for the election, having being bred and brought up in Aba. He schooled and works in Aba and therefore feels their impulse.

“We’re not talking of somebody who lives in Houston Texas United States; who does not know the problem of the city. Whenever there’s an election, he flies in. Chimaobi is an Aba boy to the core, he knows the terrain.

“In terms of representation, he knows their problems and how to tackle it at the national level; in lawmaking; he will make quality laws that would be of immense benefit to not only Aba people, but entire country and in terms of oversight function, Chimaobi Ebisike knows the projects and programmes of Nigeria and how to move things forward”, he maintained.