The Embassy of Ukraine in Nigeria says Nigerians who are willing to travel to Ukraine to fight Russian forces must be willing to provide $1,000 for ticket and visa. 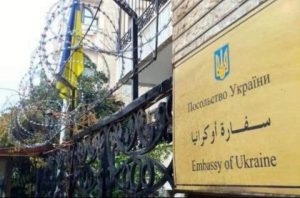 The embassy stated this when scores of Nigerian men converged on its premises in Abuja on Thursday to express their readiness to join the Ukrainian side.

In an interview with our correspondent, the Second Secretary at the Ukrainian Embassy to Nigeria, Bohdan Soltys, confirmed that $1,000 would be needed by Nigerian volunteers.

The announcement did not go down well with the Nigerians who lamented that the price was too high.

“The $1,000 requirement is too high,” said Monday Adikwu, with number 96NA/41/2808, who was dismissed from the Nigerian Army for leaving his duty post to visit his pregnant wife without permission.

“They said we should provide evidence of military experience, passports and $1,000 for tickets and others. When I asked what the salary is, the guy first said $7,000 and later changed it to $3,300 per month. I showed him my military and training certificates.”

When asked why he wants to go to Ukraine, Adikwu said he needed money to take care of his family including six children

He said, “I want to go to Ukraine because I am a military man. I fought in Liberia. I fought in Sierra Leone. I was part of the 33 Battalion. I was trained by Ukrainian soldiers when I was in the United Nations in Kosovo on how to shoot and drive APC tanks. I can drive it very well.

“So, when I heard about Ukraine and the way people are trooping in… I am a farmer. I don’t have anything. I am a fighter. They said they will pay us so I am ready to fight so that I can get paid and take care of my family. I will also bring glory to the name of Nigeria as a worthy ambassador.”

Adikwu, who was accompanied by other dismissed soldiers, said they were not afraid of Russian forces.

“We are not scared. It was David that killed Goliath with only a tool. So, I believe my going to Ukraine will give them victory