Confusion As Buhari Returns To Nigeria Instead Of London

There was confusion, on Friday, when one of President Muhammadu Buhari’s aides said his principal had returned to Abuja. Bashir Ahmad, a personal aide… 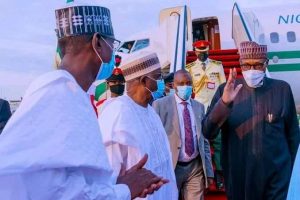 Bashir Ahmad, a personal aide of Buhari, set tongues wagging when he tweeted that the president, who attended a summit in Kenya, was back in the country.

Buhari was expected to proceed to the United Kingdom for a two-week medical check up after the Kenya event.

Femi Adesina, Buhari’s spokesman, had announced the medical trip in a statement issued earlier in the week.

“From Kenya, President Buhari will proceed to London for routine medical checks that will last for a maximum of two weeks,” Adesina had said.

But on Friday afternoon, Ahmad tweeted that Buhari was in Abuja.

“President Muhammadu Buhari has returned to Abuja, after his participation in the 50th Anniversary of the UN Environmental Programme (UNEP) in Nairobi, Kenya,” he wrote on Twitter.

As of the time of filing this report, no official statement had been issued on the change in the president’s itinerary, fueling speculations that the checkup might have been put on hold indefinitely.