The troops of federal investigation bureau arrested a suspect who confessed how he imports weapons from Nigerians Republic to Nigeria. 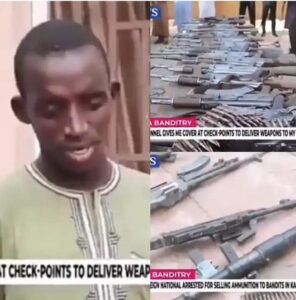 The suspect confessed that he imports weapons from Niger Republic, and that there is a military personnel who usually gives him a cover at the security checkpoints. He confessed that he has sold up to 450 riffles, 8000 live ammunition and other deadly weapons in zamfara state, Kaduna state and Niger state. He sells riffle between 600,000 to 1,000,000 Naira.

When asked why he engages in such business, he revealed that business pays well.

Horror: How side chic drugged and stabbed Nigerian billionaire to death