The Peoples Democratic Party has received 1,615 card-carrying members of the All Progressives Congress in Toungo Local Government Area of Adamawa State, on Saturday. 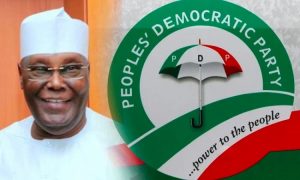 The defectors, who were protesting what they described as the failure of the President, Major General Muhammadu Buhari (retd.), to fulfill his campaign promises, as well as worsening insecurity, were received by the Chairman of the Adamawa State chapter of the PDP, Tahir Shehu.

The 1,615 APC defectors surrendered their APC membership at the ceremony organised to receive them into the PDP, in Toungo, on Saturday.

Speaking through their representatives, Mustapha Albashir, Alhaji Gana and Mallam Yahya Abubakar, they cited worsening insecurity, poverty and economic difficulties they had experienced under the regime of Buhari as reasons for their actions.

They regretted not seeing any progress since 2015 when they worked against the PDP to install the APC.

They now felt convinced that the PDP was the right place because of the real change brought by Governor Fintiri since 2019, when the PDP ousted the APC in the state.

Abubakar said, “Our journey into the APC was meaningless, we ganged up to defeat the PDP since 2015 but we have realised we made a mistake.

One of the reasons over 1,615 of us decided to come here today even though we are actually more than 6,000 joining the PDP, is because after seven years, we cannot reckon with any tangible thing the party has achieved under Buhari more than worsening insecurity, stagnation and poverty.

That is why we beckoned on our children and family members, to retrace their steps as a show of appreciation for the progress we have seen in Toungo because this council has been in darkness since its creation over 30 years ago before the PDP administration of Governor Fintiri reconnected the council to the national grid. We are not ingrates, because what the administration has done is a debt, we must repay with our votes and support. Sadly, the APC has set us back and we are leaving the party for the party that has brought us development.”

Shehu, while receiving the defectors, said the former Vice President Atiku Abubakar has asked that he will like to shake hands with the 1,615 new members, who have demonstrated courage in protesting against bad governance.

Shehu said the standard protocol was for the party to receive them at the ward level which the party has done.

He, however, added, “Atiku has asked the party to make sure 1,615 of you, who left the party from Toungo, are brought to his mega rally in Yola, on August 15, to celebrate his emergence as the PDP presidential flagbearer, because he would like to shake hands with you.”