Rivers State Governor, Nyesom Wike says his government has received an intelligence report that politicians in the state have allegedly started recruiting cultists and ex-convicts to be used as political thugs before and during next year’s general elections. 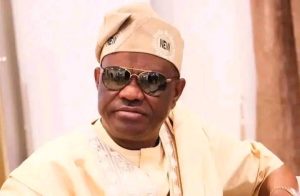 Governor Wike in a state broadcast said the reports also indicated that meetings for such recruitment are being held in hotels and other entertainment centres around the state.

He warned that his administration will not allow any politician, despite his past or present status or political leaning, to upset the relative peace which the security agencies have struggled to maintain in Rivers State.

Governor Wike, however, warned of more drastic action against accomplices of the criminal plot, saying his administration will “pull down any hotel or entertainment centres where such gatherings are held”.

The Rivers State Governor also revealed that the security agencies have been alerted to be on the trail of those politicians suspected of recruiting the thugs.

He called for more vigilance among the residents while thanking them for their support since assuming office in 2015.