Former President Goodluck Jonathan is not on the list of presidential hopefuls expected to be screened by the All Progressives Congress (APC). 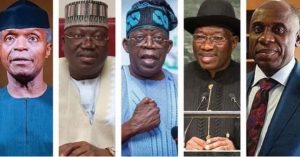 In April 2022, after supporters besieged his Abuja residence to ask him to contest the 2023 presidential election, Jonathan had not given a definite response.

“You are calling me to come and declare for the next election. I cannot tell you I’m declaring. The political process is ongoing. Just watch out,” he had said.

Days after, a northern coalition bought the APC presidential expression of interest and nomination forms for him, but the former president had denied approving the purchase.

Despite ongoing speculations on him contesting, the former president is still yet to make any definitive statement on if he will seek a return bid.

Felix Morka, APC spokesman, had said 28 presidential forms were purchased, but three persons — Chris Ngige, minister of labour; Timipre Sylva, minister of state for petroleum: and Godwin Emefiele, governor of the Central Bank of Nigeria (CBN) — did not submit their forms.

A form was also purchased for Akinwumi Adesina, president of the African Development Bank (AfDB), but he had said he was not interested in contesting.

Below are the names of the presidential hopefuls for screening as listed by APC.