IPOB Allege Plot To Kill Their Leader, Nnamdi Kanu In Detention* He is denied access to his lawyers, Doctors and family – Emma Powerful

Following the refusal of the Nigeria Government and her wicked security agency, the Department of State Services, DSS, to allow our leader Mazi Nnamdi Kanu’s lawyers and family access to him in the dungeon of DSS secret cell, it is now confirmed that their real intention in kidnapping him and bundling him back to Nigeria is to kill him. The mission they could not actualise in September 14, 2017 when soldiers invaded his Afaraukwu home during Operation Python Dance is what they want to actualise now. 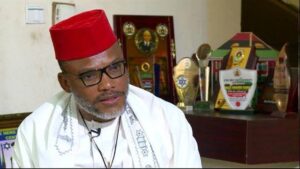 His health has been detoriatorating in the DSS cell as he has refused to eat their food since almost one week they kidnapped him. We demand that DSS should allow him access to his lawyers and family members for this is his lawful right. And his lawyers are being harassed and we pity them and Nigeria if anything happen to our leader Mazi Nnamdi Kanu the Nigeria Government and security agencies must understand the product we are made of and how prepared we are.

South East Governors and Ohaneze including politicians in the region must ensure that nothing bad happen to Nnamdi Kanu because Miyetti Allah and sympathisers of terrorists are going free in the country but ordinary person and innocent citizens are being molest everyday because they are Biafrans. We won’t accept that.

We also want to tell the DSS to jettison any plans to inject our leader with poisonous vaccine that will make him die slowly. Any such attempt will come with unimaginable consequences! Nnamdi Kanu must not die in custody!

The Fulani- controlled federal government of Nigeria and DSS should release our leader for international medical check up. He must have access to his doctors to ascertain his current health status since he was abuducted and tortured by the security agents.

We declare without equivocations that the Nigeria Government should not take our calmness for granted. Should anything untoward happen to our leader while in detention or even after, we will totally cripple Nigeria and its Government!

Our intelligence units are following up events including the torture being meted out to him since his abduction. The world should see how the wicked Nigeria Government is provoking us.

While Boko Haram terrorists and bandits maming and killing indigenous Nigerians in their ancestral lands are made to go free, and even the few captured ones are released and given cash after sumptuous treatment in detention, an innocent freedom fighter is made to languish in detention.

His lawyers are being harrasment also. This is unacceptable! The world should not pretend about this injustice!