I slept with my son to give my husband a child’

It sounds abominable in every sense of the word that a woman would sleep with her own biological son just to test her fertility after failing to get pregnant for her husband in her second marriage. 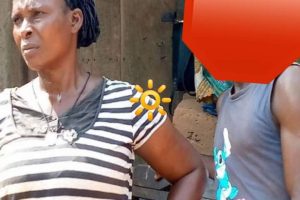 But that was exactly the case with Matina Agawua, a native of Yelwata, a remote settlement in Nasarawa State. She slept with the son she had from her first marriage to please her new husband who was threatening an end to their relationship if she would not conceive a baby.

Matina, who lost her first husband to herdsmen attack after they were married for about two years, had just a son and decided to remarry after spending 13 years as a widow.

But for more than six years after getting married to her second husband, an indigene of Toto Local Government Area of Nasarawa state identified simply as Mr. James, she could not conceive a child for what she said was no fault of hers.

“We had been married for more than six years but were still childless due to my husband’s fault, according to doctor’s report, and I was hearing from the grapevine that he was planning to take a second wife on the grounds that I could not give him a child” Matina told our correspondent.

Trouble was said to have begun when Matina got married to her first husband, Mr Philip (now late), and the marriage was blessed with just a child before Philip died from a gunshot when some herdsmen invaded his village about two years later.

After Philip’s death, Matina had picked up courage to remain in the village since she had a son with her late husband. But owing to some irreconcilable differences between her and her husband’s relatives, she left the village and returned to Yelwata, her maternal home where she started a mini restaurant to eke out a living for herself and her only child.

Because of the remote nature of the community, however, the business was slow, hence she relocated to Lafia, the Nasarawa State capital where the business appeared to thrive better. It was in the course of selling food that she met James, her second husband, and they later got married.

But the marriage ran into a storm over its continued failure to produce a child that would cement the bond between them. In fact, matters got worse as Matina appeared to be giving more attention to her son than she was giving her second husband, causing James’s parents to feel that Matina was simply wasting their son’s time as she was incapable of bearing a child.

James’s mother was said to be particularly unhappy about the situation as she had eagerly looked forward to carrying her grandchild when the marriage was consummated. But six years down the line, there was no sign of pregnancy, much less a baby. Thus a plan commenced to get James a second wife.

At this point, Matina had joined resources with her husband’s to build a house in Lafia where they lived, with the implication that the new wife would occupy one of the rooms while Matina claims that she committed more resources to the project than her husband.

Amid the frosty relationship, accusations and counter accusations created by the development, the couple did not deem it necessary to go for a medical check-up to ascertain the source of the problem.

Matina however blamed James for the oversight, saying that she was willing togo forfertilitytest but her husband was not. She said she suspected that her husband was suffering from low sperm count which made him unable to father a child.

Matina said she had undergone a test on her own since her husband refused to go for one, and the result showed that there was nothing wrong with her fertility. But to furtherconvince herself about her fertility status, she decided to lure her own son, a student in Akwanga, into a secret affair with a stem warming that he should not reveal it to anyone.

Matina said she did not want to fall in love with an outsider so as not to betray her husband or make him feel bad.

She said: “Since he is not comfortable with us going for medical checkup on the assumption that nothing was wrong with him, I decided to convince my little son, who is just about 16 years old and schooling in Akwanga

“I visited him regularly. He stays in a private apartment with my relatives, so I was going there to spend some time with them, especially on weekends when my market is off.

“It was actually difficult making love with my own son, but circumstances forced me to go into it. I needed to be sure of my fertility.

“I know my husband very well. If he discovered I had an affair with a man outside, he would kill me.

“I love him so much and I’m afraid of him, so this evil plan kept ringing in my mind to know how fertile I am.”

“I tried to visit my son in Akwanga mostly when I was on my ovulation period. I decided to develop a crush on him and draw him very close to me. We got intimate and ended up having s*x.

“One faithful day while I was on my ovulation period, I visited him. It was at about 11pm. I held his hand and made him sit beside me.

“I asked him if he had ever had s*x and he said no. I held him in my arms. This time, I felt warm and I think he too did.

“After that night, I felt extremely embarrassed, and guilty that I committed such an abomination with my own son.

“It was actually a taboo, but I warned him to keep it secret.

“I didn’t do it for any other reason than emotional turmoil.

Matina told our correspondent that she didn’t actually have s*x with her husband for about three months, “because we were feeling a little disconnected from each other and boredom crept into our relationship

“But from that singular session with my son, l missed my period that very month of January 2022, and a medical test showed that I was pregnant.”

When she broke to her husband what ordinarily should be a piece of good news, he denied being responsible for it and suspected a foul play. James reminded her that they had not had an affair for about three months, wondering how that could have resulted in a pregnancy.

The development led to suspicions which created a big crisis in the family, prompting a friend to suggest that they should subject themselves to medical tests to ascertain the paternity of the unborn child.

The test at Dalhatu Araf Specialist Hospital Lafia shows that the husband is not the father of the child. Matters got worse as the test further revealed that her husband has weak and very low sperm count that would not enable him to father a child.

As soon as these details were made known to the husband, he became angry, accusing his wife of adultery and threatening her life, which made her to open up on the details of the pregnancy.

Not satisfied, the husband summoned Matina’s son who underwent the same test confirming that he is actually the father of the unborn child.

Matina, who spoke to our correspondent after persistent pressure, said: “I am not a loose woman. I am just a woman who loves her husband very much and didn’t want to hurt or lose him.

“I did what I did to save my marriage. I got reliable information that he was planning to take a second wife on the advice of his parents and that the wife would occupy one of the apartments we suffered to build together.

“I was not comfortable with that idea and felt I could test my fertility with my son and impose it on him (husband).

“Look at my age. I’m not getting younger and my husband was not prepared to address the matter medically.

“Look at the result of the test; it shows low sperm count. There is no way he would have been able to impregnate me.

“I know I was doing the wrong thing and betraying my husband, but I saw it as a lesser evil than going outside.

“Now the man is even threatening to kill my son for impregnating me, so I had to move my son out of Akwanga and take him somewhere else to save his life.

“This is more so because I was the one who put him into the whole mess. I have to protect him. ”

Matina’s husband said he would not accept a pregnancy that did not emanate from him. “Even sleeping under the same roof with him is scary; he might harm me in the middle of the night.

“He is very furious, so I have to leave the house for him. But all I want is that since he didn’t like me again for what I have done, I won’t abort it. Rather, I will allow it and deliver my baby. I have been looking for it for long, so I won’t let it go. It belongs to my son.

“I have decided to keep it because it is blood within my blood. I will keep it. All I want is that since the marriage didn’t work, we should sell the house, share the proceeds and everyone will go his way.”

Matina said she has documents containing the house and bank transactions used in building the house.

“I will engage a lawyer if my husband tries to do anything funny. He should not take me for granted as I’m prepared for him.

“He can’t father a child. His sperm count is very low and he is not ready to address it. What does he want me to do?”

When our correspondent contacted the husband, he expressed disappointment that the wife had opened up on all the secrets to the outside.

“Why did she go to the media? he queried

“How can she allow her son to impregnate her and try to foist it on me? How would she do that? That is my anger.

“But if she is ready to go, let her go. We built the house together and whatever she wants, I don’t have an issue with that.

“But I can tell you, that woman is a dangerous woman to stay with.”