The Chairman of DAAR Communications Limited, Raymond Dokpesi has reportedly been arrested by the Police in the United Kingdom.

Daily Post reports that Dokpesi was arrested in London on Sunday while traveling to the United Kingdom (UK). 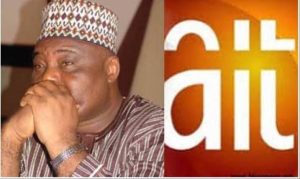 Dokpesi had boarded a Lufthansa Flight LH916 from Frankfurt to London but wa picked up at Terminal 2 of Heathrow Airport in London.

However, a source who informed the publication of Dokpesi’s arrest, said the reason for his detention was unknown.

“So when we landed, the police came in and ask who is Raymond Dokpesi and they now took him away. He was wearing agbada. He was arrested in London.”

Dokpesi was preparing for a meeting with the presidential candidate of the Peoples Democratic Party, Atiku Abubakar in London to discuss strategies leading up to the presidential election next month before his arrest.