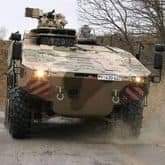 While the date of the event is unknown, Eid-el-Fitr was celebrated by most Muslim faithful across the globe on May 13.

According to the pictures sighted by SaharaReporters, the insurgents were seen in about four groups praying together in open fields. 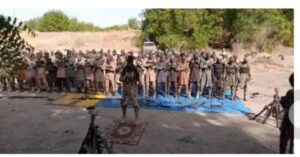 The Nigerian military has repeatedly claimed that the insurgency had been largely defeated and frequently underplays any losses. 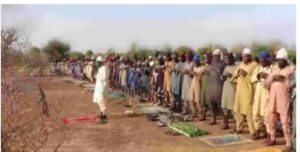 In the past months, the insurgents have targeted soldiers who lay ambush on their path. 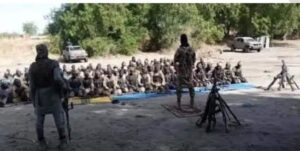 Hundreds of soldiers and officers have been reportedly killed since January 2021.

At least 25 soldiers were recently killed when a suicide bomber identified as Abdullah al-Ansari rammed an explosives-laden pick-up truck into a military convoy during a clash in Goniri, a border community between Yobe and Borno states, killing many soldiers.

In February, about 20 soldiers were also killed in Malari, Borno State, by the insurgents.

SaharaReporters gathered that the soldiers were on patrol to clear some Boko Haram elements in the area following a credible intelligence when the group ambushed them.