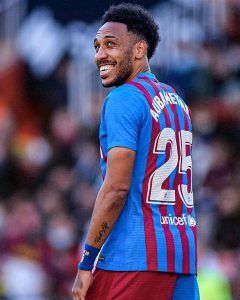 Aubameyang’s double came either side of a Frenkie de Jong tap-in as a free-flowing Barca hit Valencia with three goals in 15 minutes towards the end of the first half.

And while Valencia briefly raised hopes of a comeback when Carlos Soler headed in Bryan Gil’s cross after half-time, a stunning strike from Pedri, which skimmed off Aubameyang’s back, completed Barcelona’s impressive victory.

Aubameyang had made two substitute appearances in La Liga before starting against Napoli in the Europa League on Thursday, but this was his first league start for Barcelona since having his contract terminated by Arsenal last month.

The 32-year-old was at his pin-point best as he raced clear and fired in to open the scoring before bundling home his second and Barcelona’s third at the back post.

The victory lifts Barca above Atletico Madrid on goal difference, despite Atletico’s win at Osasuna on Saturday. Second-placed Sevilla had earlier slipped up at Espanyol, drawing 1-1 to leave Real Madrid six points clear at the top of the table.

Barcelona’s quick-fire treble began with a simple chip over the top from Jordi Alba but Aubameyang still had work to do, the striker taming the ball on its third bounce before firing it high into the net under pressure from Omar Alderete.

The second was more intricate, a superb team goal going through Sergio Busquets and Alba before Ousmane Dembele generously side-footed across for De Jong to finish.

Dembele was key to the third too, as his through ball released Gavi, who crossed to the back post where Aubameyang tapped in number three.