Abaribe opens up on IPOB, other secessionist groups in Southeast

The Senate Minority Leader, Enyinnaya Abaribe, has disclosed that the Indigenous People of Biafra [IPOB] is not the only secessionist group in the Southeast as there are many more others in the region. 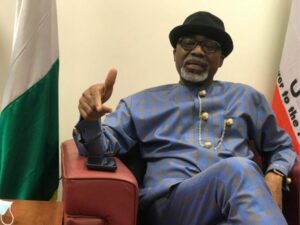 Enyinnaya, who disclosed this when he featured in a Channels Television’s programme, Political Paradigm on Tuesday said there are more than 30 secessionist groups in the South-East.

He stressed that secession agitators are merely protesting the marginalisation of their people and demanding justice and equity in the country.

The lawmaker, however, expressed regret that the focus of Nigerians has always been on the Indigenous People of Biafra (IPOB)

He asked the Federal Government to dialogue with the self-determination groups to restore calm and peace in various parts of the country.

Abaribe said: “One of the biggest problems the media has is that they tag everything IPOB. In the South-East, you won’t believe that there are more than 30 different separatist organisations – IPOB, the Movement for the Actualization of the Sovereign State of Biafra (MASSOB), there are so many and each one of them comes back to the same thing.

“Why you are having separatist agitations everywhere today in the West, in the South, in the South-South, is that some people are unable to manage our diversity, that is just the fact.”