*Presidency knocks Obasanjo, others over attacks on Buhari* Posted by News Mirror, December 16, 2021 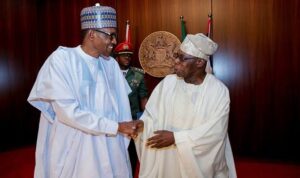 It disagreed with the former leader’s remark that the President has nothing to offer in office, particularly on the worsening insecurity that has upset the country.

The government warned Nigerians against the use of incendiary and insulting words, especially by leaders, saying that they can overheat the polity and heighten tension.

Government also said that with a recent court declaration, bandits have been declared as terrorists, stressing that no administration in Nigeria’s recent history has provided the security agencies with the hardware to tackle insecurity as that of President Buhari.

The Minister of Information and Culture, Alhaji Lai Mohammed, made the clarifications at a briefing in Abuja against the backdrop of increasing banditry and kidnappings in the country.

Ex-President Obasanjo had on Monday claimed that President Buhari has nothing more to offer the nation.

He said the nation should start looking beyond the tenure of Buhari by shopping for a new leader in 2023.

Obasanjo said: “President Buhari has done his best. That is what he can do. If we are expecting anything more than what he has done or what he is doing, that means we’re whipping a dead horse and there is no need.”

But, Mohammed said the assessment of the President by Obasanjo was wrong because Buhari was doing his best for Nigeria.

The Minister said: “If anybody is worried today about the security situation of the country, it is Mr. President.

“ President Buhari has done so much, under very difficult economic and social conditions, to tackle insecurity in our country.

“Not only has he done so much. President Buhari continues to do much more to keep Nigerians safe. To say he has nothing more to offer is untrue, fallacious and smacks of dirty politicking.

“By boosting the number and capacity of our fighting forces, Mr. President is putting them in good stead to tackle insecurity not just during the life of his administration but long after he would have left office.”

Mohammed assured Nigerians that Buhari will leave the nation better with sustainable achievements.

He added:” President Buhari is leaving a legacy of security, infrastructural development, economic prosperity and social cohesion for Nigeria.

”This may not seem obvious today, amidst daunting challenges, but posterity will be kind to this President.

“Despite all this, President Buhari has not relented, constantly presiding over meetings of security chiefs to get an update and also issue necessary directives, and not missing any opportunity to offer succour to his countrymen and women, when necessary.

“The skewed narrative in certain quarters that the President has not shown enough empathy is glib talk. The President has also continued to work with our neighboring countries and indeed our Western partners to tackle insecurity, especially terrorism.