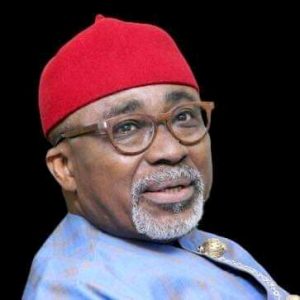 Abaribe, who is eying the PDP governorship ticket in Abia State, had been caught in the web of a zoning formula, which favours Abia Central and Abia North senatorial districts, given that his Abia South district had already taken its turn.

The event was at the valedictory session to mark the exit of Adamu; Deputy National Chairman (North), Abubakar Kyari; and Deputy Governor of Zamfara State, Hassan Muhammad Nasiha.
APC governors

“Some of you are the best materials this country can have but you are in the wrong camp. It is in my heart of hearts…those of you who are willing to reach out to a higher pedestal, our hands are open and we are stretching the hands to you.

“I assure you that I will continue to cherish our relationship. I hope and pray that you will see the light and come over to APC.”

THE highpoint of the session came when the senators remembered the sobering political chess games in their home states, which powerful governors could swing against them.

Senator James Manager (PDP, Delta) spoke the minds of his colleagues, noting: “The first test for you will be to protect those who are here. Not me, because we are not in the same political party.

“You know how it is done. Those of us, on this side, will be watching with keen interest. We know who you are. We know what you can do. Try your best for all of us.”

Senator Ali Ndume (APC, Borno) also spoke in the same vein, saying: “Now that we have people from here (Senate) as leaders of the party, you have the responsibility. It is not about us, it is about the Senate. It is not about Ndume being a senator from Southern Borno, but about protecting the position of the Senate.

“You know that the rate of turnover is very worrisome. It is not because the legislators are not performing. We need you, the chairman, to protect the institution. And this institution is made up of individuals with wealth of experience. Nigerians are expecting a lot from the institution.”