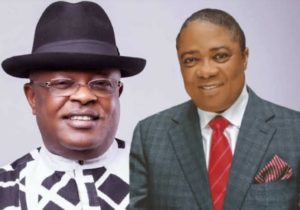 Ibeto endorsed Umahi for the number one position in the country while receiving honorary award from Ebonyi State University (EBSU), Abakaliki during its 7-11th convocation.

He described Umahi as a man of honour who always deliver on his promises and endorsed the governor for 2023 presidency.

“Anybody visiting Ebonyi State now will be amazed and full of wonder and admiration for what Your Excellency have turned this state into in just a few years. I am proud to be associated with you.

“Governor Umahi has initiated the use of cement in road construction, producing concrete roadways that would last a very long time and will be less difficult and less expensive to maintain. Over 300km of such concrete roads have been built.

“He has paid civil servants their salaries and allowances regularly. He has moved Ebonyi to become the rice basin of Nigeria. He has given education deserved special attention and this has resulted in unprecedented sharp increases in undergraduate enrollment in universities. He has moved Ebonyi State into the enviable position as the fastest growing state economy in Nigeria.

“Notwithstanding the fact that I am not a prophet, I am inspired to predict that, based on your records of service in our state, when the question “who shall we send, and, who will go for us?’ comes up, your name will ring forth for recognition and very serious consideration,” Ibeto said.

He noted that his business group, Ibeto group will soon roll out Ibeto Portland cement in NIGERCEM factory in Ishielu Local Government Area of Ebonyi State and that 5,000 jobs would be generated directly and indirectly for the youths of the state.