Police in Kano State have arrested a 100-year-old grandmother and 17-year-old boy Isah Hassan known as Shahidai for allegedly removing the eyeballs of a 12-year-old Almajiri boy Mustapha Yunusa for charm. 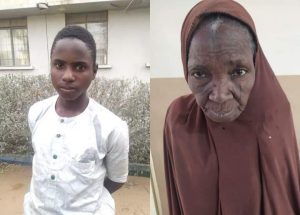 The spokesman of the Kano State Police Command, SP Abdullahi Haruna Kiyawa confirmed the arrest in a statement issued to DAILY POST.

He said the suspects, Isah Hassan and grandmother Furera Abubakar all of Dantsinke layin Rimin Hamza Quarters in Tarauni LGA, Kano State were arrested for conniving to remove the victim’s right eye.

Kiyawa explained that their arrest followed a police report that the suspects used a sharp knife and removed the right eyeball of an Almajiri boy and fled with it to an unknown destination.

He said the team immediately went to the scene and rushed the victim to Murtala Mohammed Specialist Hospital Kano, where a Medical Doctor confirmed that the eyeball of the victim was forcefully removed using a sharp object.

“The Suspect therefore went and deceived one street beggar (Almajiri), lured him to a nearby bush tied his hands and forcefully used a sharp knife and plucked his right eyeball”

Kiyawa said the case has been transferred to the Criminal Investigation Department for discreet investigation.