The spokesman of the Atiku Campaign Organisation, Daniel Bwala, has accused Governor Nyesom Wike of frustrating efforts by the Peoples Democratic Party (PDP) to micro-zone its presidential ticket to the southeast. 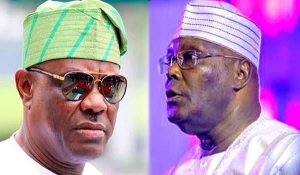 Bwala made the comment on Friday, hours after the Rivers State leader briefed the press where he opened up on the crisis rocking the PDP since its presidential primary election in May.

“The whole gamut of power zoning here or there started with Governor Wike. He virtually had everything he wanted. He brought this chairman (Ayu). When a discussion was being done in the party that power should be zoned, I recall very well, Atiku was inclined that it should be zoned to either southeast or northeast – these are the two geo-political zones that have not benefited,” Bwala said on Channels Television’s Politics Today.

He claimed that the move also led to the departure of the Labour Party (LP) presidential candidate Peter Obi from the main opposition party.

“He (Wike) influenced the emergence of leaders that sat in committees – whether committees for party positions or elective office. At his behest, a recommendation was made that it should be thrown open evidently because he is not from the southeast,” the spokesman added.

“That led to the departure of Peter Obi. If the zoning thing was followed, Peter Obi or probably the former SGF (Ayim Pius) would have emerged as the presidential candidate of the party. ”

Bwala, however, believes that despite the wranglings in the PDP, his principal’s quest to “unify” Nigeria won’t change if elected as president.

“The last politician I can look at and say he is discriminatory is Atiku Abubakar,” he maintained

Abia 2023: Charles Ogbonnaya Congratulates Chief Okey Ahiwe describes him as a man with competency and