We refer to human heads as balls, hearts as transformer, hands as fans -Suspected ritual ki3lers arrested in Ogun confess

Seven members of a serial ritual kil3er syndicate have been apprehended in different parts of Abeokuta metropolis by men of Ogun state police command. 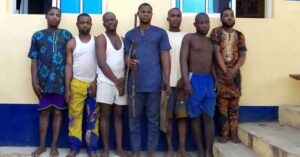 Upon the report, the DPO Bode Olude division DSP Durojaye Rotimi, who visited the scene with his crack detectives, embarked on an intelligence-based investigation to unravel those behind the dastardly act.

Acting on credible information, the detectives traced and apprehended Lekan Oladipupo, who on interrogation confessed been the actual person who shot and killed the deceased with his Dane gun. His confession led to the arrest of the other six suspects.

On interrogation, each of the suspects narrated their respective roles in the gruesome murder of the deceased and others who have been killed in similar circumstances.

Lekan Oladipupo informed the police that his own role is to look for their victim, usually in the bush around mawuko area, and shoot such an unfortunate person to death. He will then contact Sulaiman Aremu, who will butcher the corpse of the victim and remove vital parts to be distributed to their standby customers.