The battle for the Abia APC Governorship ticket between the acclaimed winners , Chief Ikechi Emenike and Dr. Uchechukwu Sampson Ogah is far from being over if the press release from Dr. Ogah camp is anything to go bye. 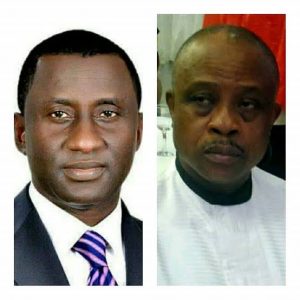 The Isuikwuato born banker/businessman turned politician listed out the some reasons why he is the APC Candidate for Abia state in 2023 general elections.

Here are his reasons :-

1. Dear party faithful and good people of Abia State, as the INEC timetable stipulates, 15 July is slated for political parties to upload names of gubernatorial candidates into the INEC portal, after which, courts will take over.

2. As you are aware, High Chief Ikechi Emenike, got a judgement order from Abia State High Court, mandating APC to forward his name and those of House of Assembly to INEC.

4. Though not a true position of the law as regards pre-election matters where only Federal High Court has jurisdiction and not a State High Court, the party APC is bound to obey it until set aside on appeal and the appeal has been lodged.

5. In the interim, the APC uploaded his name and those of House of Assembly into the INEC portal (respective portal passwords are given to each political party by INEC which makes such portal resident with a political party for a while).

6. By this, as soon as your name is uploaded thereat, acknowledgement slip is printed which bears your name and INEC’s name and logo.

7. These acknowledgement slips are what some Abia APC aspirants are brandishing in the media, claiming their candidacy had been accepted by INEC. Not at all. INEC portal resident with APC acknowledged receipt of their names temporarily, subject to the final processes and Court judgements leading to final publication of names in October.

8. It should be restated that the basis for uploading their names in the interim is the Court judgement obtained from Abia State High Court.

9. Abia State High Court erred in law by assuming jurisdiction in a matter it lacks jurisdiction. And by law, any decision or judgement by a court without jurisdiction is a nullity.

10. By the Electoral Act 2022, only the Federal High Court and no other court, has primary jurisdiction in pre-election matters.

11. Court of competent jurisdiction will upturn that judgement and declares who are the Abia APC candidates whose names would be uploaded into the INEC portal instead.

12. Should the Court of Appeal not determine the appeal against the judgment obtained from Abia State High Court before 15th July, 2022, there won’t be any cause for alarm.

14. We should be guided appropriately. What some Abia APC aspirants are brandishing are mere acknowledgement slips obtained from INEC portal resident with the party, as a result of Court judgment gotten from a Court with no jurisdiction.

15. The names of some candidates of Abia APC on the main INEC portal is different from what is being brandished in social media.

16. The posers are: why did they approach a State High Court instead of a Federal High Court in a pre-election matter if they are sure they did the right mode of primaries? Why brandishing INEC portal’s acknowledgement slips as if those are final INEC submission acknowledgement? Why did they ask the judge at Abia State High Court (Umunneochi) to hide the judgement copy in order to delay compilation of records to the Court of Appeal? Why the resort to illegality to achieve short-term goal of having their names uploaded before July 15 whereas October is still far when the right process will finally determine the right candidates of the APC in Abia?

17. Our people, please don’t be fooled. Truth will unveil soonest. Victory will be ours in the end.

18. October will determine final dates for final submission of candidates of political parties for 2023 General elections and not July 15th.

Thank you and God bless you as you keep hope alive.