The Minority leader of the Senate, Enyinnaya Abaribe, has resigned from the Peoples Democratic Party (PDP).

Senator Abaribe made his decision known in a letter to the Ward Chairman of the PDP in his ward, Ward 5, Obingwa Local Government Area of Abia State.

In the letter dated May 24, 2022, the Senator wrote, “This development is consequent upon the shameful display of illegality, impunity, and undemocratic decision of the party and after due consultations with my constituents”.

Concerning his next move, he told Channels Television that he would be vying for the Abia South senatorial seat under the All Progressives Grand Alliance (APGA).

In a separate letter, Senator Abaribe notified Senate President Ahmed Lawan of his resignation from the PDP.

“This also means my resignation as Minority Leader of the Senate,” he said.

“I wish to thank you and my dear colleagues in the leadership of the Senate for the warm camaraderie we enjoyed while I was Minority Leader.”

His resignation is his latest move following his bowing out of the Abia State PDP governorship race which was held on Wednesday.

In a later conveying his decision, the lawmaker cited the failure to establish a level-playing field for the aspirants and the interferences of godfathers.

‘Defence Of My Convictions’

“Accordingly, I Senator Enyinnaya Harcourt Abaribe will not be part of this charade,” he said in a statement captioned ‘Notice of Non-Participation in the Abia PDP Gubernatorial Primaries’.

“I am therefore not participating in the exercise, which means that I will not be part of the PDP governorship primary election that holds in Abia State on Wednesday 25th of May, 2022 as doing so would have amounted to an endorsement of an illegality that is already being challenged in the courts.”

The former deputy governor faulted what he described as a shambolic process in the lead-up to the elections.

“The implication for our party is grave and as such has put all ongoing primary exercises on quicksand,” the outspoken lawmaker said.

“I am known for standing firm in defence of my convictions for the right of all people to a free and fair democratic process. That was why my campaign set sail on a democratic journey that took us to all the nooks and crannies of our dear state.”

Below in pictures are Abaribe’s letters conveying his resignation from the PDP as well as the Senate Minority Leader’s post: 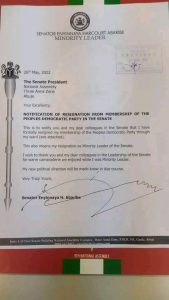 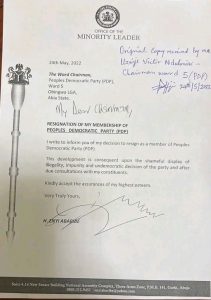