The U.S. government accuses Hushpuppi of involvement in a “North Korean-perpetrated cyber-enabled heist from a Maltese bank” in February 2019. 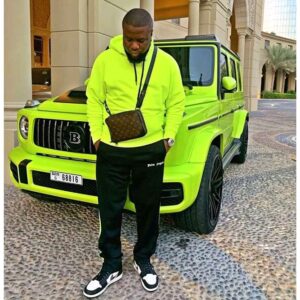 The United States’ government has accused Ramon Abass, also known as Hushpuppi, of involvement in a North Korean conspiracy leading to a multi-billion dollar cyber fraud.

Mr Abass, who is currently facing money laundering and wire fraud charges in the United States, allegedly took part in a “North Korean-perpetrated cyber-enabled heist from a Maltese bank” in February 2019.

This was contained in a statement issued by the U.S. Department of Justice on Wednesday.

Federal prosecutors unsealed a charge against Ghaleb Alaumary, 37, of Mississauga, Ontario, Canada, of money laundering for the North Korean conspiracy, among other criminal schemes.

It was stated that Mr Alaumary, who agreed to plead guilty to the charge, roped in Mr Abass in the alleged crime.

“Alaumary was a prolific money launderer for hackers engaged in ATM cash-out schemes, cyber-enabled bank heists, business email compromise (BEC) schemes, and other online fraud schemes. Alaumary is also being prosecuted for his involvement in a separate BEC scheme by the U.S. Attorney’s Office for the Southern District of Georgia.

“With respect to the North Korean co-conspirators’ activities, Alaumary organised teams of co-conspirators in the United States and Canada to launder millions of dollars obtained through ATM cash-out operations, including from BankIslami and a bank in India in 2018.

“Alaumary also conspired with Ramon Olorunwa Abbas, aka ‘Ray Hushpuppi’, and others to launder funds from a North Korean-perpetrated cyber-enabled heist from a Maltese bank in February 2019.

“Last summer, the U.S. Attorney’s Office in Los Angeles charged Abbas in a separate case, alleging that he conspired to launder hundreds of millions of dollars from BEC frauds and other scams.”

Embattled Hushpuppi
Earlier in June, the 37-year-old, notorious for flaunting his opulent lifestyle on social media, was arrested in Dubai by special operatives, including from the Emerati police and Federal Bureau of Investigation (FBI).

The FBI’s investigation, according to the affidavit obtained by PREMIUM TIMES, revealed that Mr Abbas finances this extravagant lifestyle through crime.

He is alleged to be the leader of a mafia that facilitates computer intrusion, Business Email Compromise (BEC) fraud and money laundering. His targeted victims, majorly in the U.S, have been duped of hundreds of millions of dollars, the FBI says.

Last July, Mr Abbas alongside Olalekan Ponle, aka Woodberry, was extradited to Chicago in the U.S. where he was first arraigned.

However, because the U.S Court in Illinois does not have jurisdiction over the case, he was transferred to Los Angeles, a city in California, where his trial will commence in May.

At the pretrial services, he has pleaded not guilty to the four counts of conspiracy to commit wire fraud, money laundering conspiracies, international money laundering and engaging in monetary transactions in property derived from specified unlawful activity.

Also, the suspected fraudster has pleaded that he should be prosecuted with complaint and not indictment. This he did by filing a waiver of indictment accepted by the court.

A complaint is the statement of the law enforcement agents containing essential facts of the offences. On the other hand, to obtain an indictment, a prosecutor must present proposed charges to a grand jury – a body of jurors that investigates crimes and decides whether charges should be filed.

If convicted, the one-time Instagram sensation may spend 20 years in a U.S federal prison

SEN. ABARIBE BOMBS ORJI KALU: As deputy governor, I was made to swear an oath by Orji Kalu’s brother — Abaribe Posted by News Mirror, 3 March 2021

Trial of Sowore, others adjourned to May 7 as ‘babalawo’ storms court in solidarity